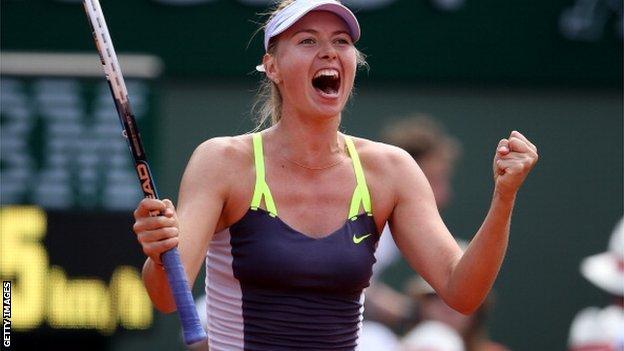 The Russian second seed fought back from a first-set whitewash to claim a 0-6 6-4 6-3 success at Roland Garros.

Serb Jankovic made a scintillating start as she reeled off the first six games, yet Sharapova slowly upped her game and a break in the seventh game of the final set proved decisive.

Their match will be the first of Thursday's women's semi-finals, at 14:00 BST, followed by the meeting between top seed Serena Williams and Sara Errani.

Sharapova lost a set 6-0 for only the fourth time in her Grand Slam career after committing 20 unforced errors in the opening set.

But she managed to put that behind her and extend her unbeaten run at Roland Garros to 12 matches.

"After the first set I knew if I wanted to win this match I'd have to change things around," she said.

"I just had to erase that chapter and move forward because the match was not over. I still felt like I was in the match and I was - I broke her in the first game and that was extremely important.

"I just fought really hard in the third set. It only gets tougher from here but I'm really happy to be at this stage again."

Seven-time champion Nadal had struggled through the first week, dropping sets to Daniel Brands and Martin Klizan but, having upped his game against Kei Nishikori on Monday. he continued in the same vain against Wawrinka.

"I think today I played my best match of this year at the tournament," said Nadal. "I was very happy with the conditions on a court that is so emotional for me.

"Stan was a little bit tired after his incredible match against Richard (Gasquet) which I thought was the best match of the tournament so far." 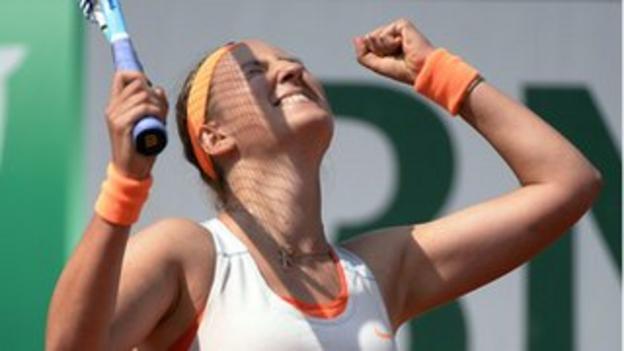 Azarenka became the first woman representing Belarus to reach the semi-finals in Paris.

The two-time Australian Open champion won five straight points to lead 6-1 in the first-set tiebreaker before taking it 7-3.

Kirilenko, who is still to progress beyond the last eight in a Grand Slam tournament, double-faulted to trail 3-1 in the second set and a long forehand handed Azarenka victory.

Azarenka said: "The first set definitely made a difference. One or two points really decided the first set, especially the beginning of the tie-break. The way I started was really dominant. That's how I was supposed to play the entire match."

"Tommy is a very dangerous opponent with lots of quality, plenty of experience and is very aggressive," said Djokovic.

"I will have to raise my game for the next match. Nadal is in great form but my win over him in Monte Carlo has given me great confidence. I will be positive."

Kyle Edmund is through to the quarter-finals of the boys' singles for the second successive year following a 7-5 5-7 6-3 triumph over American Noah Rubin.

Edmund was also a 6-2 7-5 winner alongside Portuguese partner Frederico Ferreira Silva in the second round of the boys' doubles as they overcame Lucas Gomez and Naoki Nakagawa.

Gordon Reid makes it into the semi-finals of the men's wheelchair singles at Roland Garros after coming from behind to defeat France's Michael Jeremiasz 2-6 6-4 7-5.

The Scot, ranked sixth in the world, is the first British man to play in the wheelchair events at the tournament.

However, there was no luck for Britain's women's wheelchair tennis number one Lucy Shuker after she pushed world number one Aniek van Koot all the way before the Dutchwoman won 4-6 6-4 6-4.

Shuker and partner Marjolein Buis were also beaten 6-4 7-5 by Sabine Ellerbrock and Sharon Walraven in the doubles.

Victoria Azarenka is asked if she feels "married to the clay" yet. "I still don't have any ring on my finger but I feel like we made a step forward," she jokes. "We are moving in together."

"Even though I'm yelling, whatever I'm doing on the court, this is me. This is what the sport is all about. It's about competition. It's about passion, about really enjoying yourself," Jelena Jankovic is in philosophical mood after her loss at the hands of Maria Sharapova.

Rafael Nadal explains the difference between playing Novak Djokovic in the semi-final, rather than the final. "If you win, you didn't win anything yet. That's a big difference."