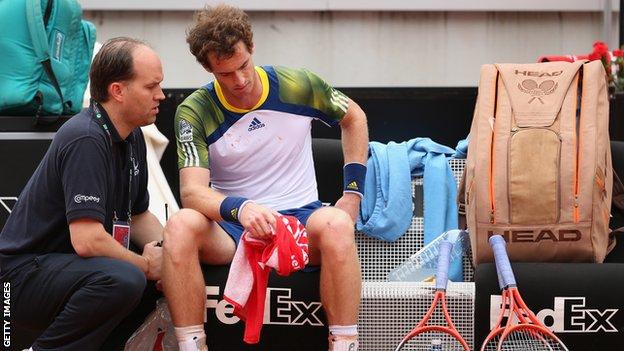 Britain's Andy Murray hopes to return from injury in time for next week's start of the grass-court season.

A back problem led to world number two Murray withdrawing from the French Open with the aim of being fully fit for Wimbledon, which starts on 24 June.

The 26-year-old tweeted that "barring [any] setbacks in the next couple of days [he] would make an appearance" at the Aegon Championships.

The event, held at the Queen's Club in west London, starts on 10 June.

Roland Garros is the first Grand Slam tournament Murray has missed since Wimbledon in 2007.

"It's been a really tough decision, and I love playing in Paris, but after seeking medical advice I'm not fit to compete," said the US Open champion last month.

"Apologies to the organisers and thanks to everyone for the messages of support. Now my complete focus is on getting back on the court as soon as possible."