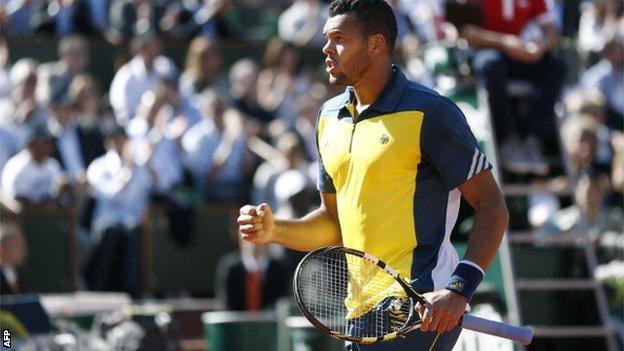 I think I struggled a little bit everywhere. I'm pretty sad about the match and the way I played

Tsonga, the sixth seed, won 7-5 6-3 6-3 to reach his first semi-final at Roland Garros, where he will face David Ferrer.

And expectation will continue to rise as the 28-year-old from Le Mans moves closer to emulating Yannick Noah's victory of 1983.

"It's extraordinary to be here and to have won," said Tsonga. "I never dreamt of this moment. Today was my moment against a champion who has won everything.

"I didn't think I would get this far without losing a set. But Ferrer has not lost a set as well, he's in great form.

"It's here at Roland Garros, in France, on a big court with a lot of people, middle of the afternoon, and I just beat Roger Federer," added Tsonga.

"I'm sure nobody expected that from me, in the past, to be there on this court against Federer and have a good win. So for me it's maybe one of the best victories.

"You know, the tournament is not finished, and I hope I will have some more."

The defeat meant Federer, 31, failed to reach the semi-finals of a Grand Slam for only the fifth time since he lost to Gustavo Kuerten in the French Open third round nine years ago.

It is his earliest defeat at Roland Garros since he lost to Robin Soderling at the same stage in 2010.

Federer made the better start to Tuesday's quarter-final with a break in the fifth game when he fired a forehand winner across the Frenchman.

That same shot let him down in game eight, however, and he found himself pegged back to 4-4 and struggling to keep down the error count.

The Swiss fought off three set points from 0-40 in game 12, the second with a beautiful flicked backhand, but he fired a forehand long moments later to hand over the set.

Tsonga had just three wins in 12 previous matches against Federer, but the confidence flowed through him at the start of the second and Federer simply could not find any rhythm.

He found himself 0-40 down again at the start of the second set and there was no comeback this time as a wayward backhand gave Tsonga a break he would not give up.

Federer was playing to the Frenchman's weaker backhand side and found it in rare form, three magnificent winners getting the home crowd roaring as Tsonga raced to a two-set lead.

A wild double-fault at the start of the third looked like the end for Federer but he immediately recovered the break with a forehand winner dragged down the line.

There was to be no great resurgence from the 17-time Grand Slam champion though.

A poor smash let Tsonga back into the game at 3-3 and the Frenchman grabbed the decisive break with a backhand that leapt off the net cord and hit the struggling Swiss.

Federer hardly lacks support in Paris, but when he fired over the baseline on Tsonga's second match point the Chatrier stadium reverberated to the sound of "Tsonga! Tsonga!"

"I think I struggled a little bit everywhere," said Federer afterwards. "To be honest, personally, I'm pretty sad about the match and the way I played.

"But that's how it goes, you know. I tried to figure things out but it was difficult, and Jo does a good job keeping the pressure on. He can serve his way out of trouble at times, and I think as well he was just better in all areas."