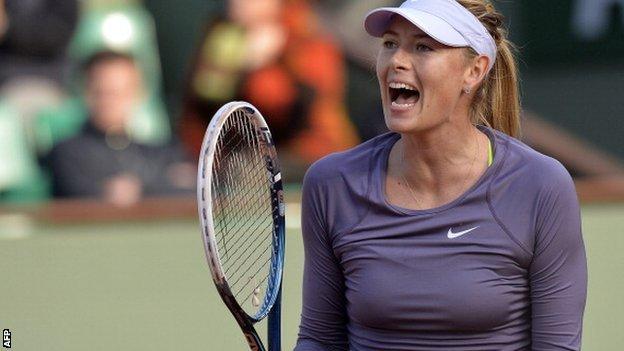 The reigning champion recorded a 6-4 6-3 triumph over the American 17th seed.

Tommy Haas thrashed Mikhail Youzhny to set up a last-eight meeting with Novak Djokovic, while Stanislas Wawrinka will face Rafael Nadal after fighting back to beat Richard Gasquet in five sets.

Match of the Day 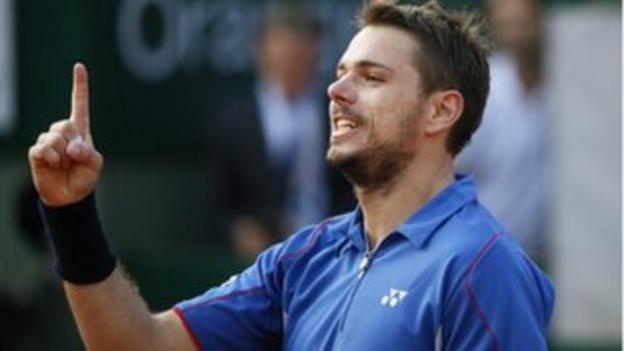 Wawrinka fought back from two sets down to beat Gasquet in a swashbuckling battle on Court Suzanne Lenglen.

In a match that saw both men suffer physically, and the Swiss engaged in a furious argument with the umpire, it was still the quality of tennis that shone through.

Gasquet, who had lost four times from two sets up in Grand Slams, twice had break points in the fourth set that would have seen him serve for the match.

But it was Wawrinka's 92 winners to Gasquet's 57 that held sway as he closed it out with a thumping forehand after four hours and 16 minutes.

"I don't want anybody to cry over this," said Gasquet. "I've had worse things than losing a match, you know.

"I don't want anybody to cry at home, but I'm very disappointed to have lost. What else can I do? It's tough."

Australian Open champion Azarenka admitted after her 71-minute win over the Italian that she was gradually becoming more comfortable on clay having never yet been beyond the last eight at Roland Garros.

"It's no doubt it's been always the most challenging for me, but I feel like I'm finally understanding what I need to do to improve. I'm on the right way."

The defending champion has won all eight sets she has played so far this year at Roland Garros and admitted she was relieved to progress against an opponent who upset Serena Williams en route to reaching the semi-finals of this year's Australian Open.

"I knew this was going to be a really hard match so I'm just pleased to be through," she said.

At the age of 35, Haas, who was ranked 112th in the world this time last year, became the oldest man to reach a Grand Slam quarter-final since Andre Agassi made the last eight of the 2005 US Open.

Haas beat as well as reaching the final of two other Tour events, winning in Munich and finishing as runner-up to Milos Raonic in San Jose.

Kirilenko eventually overcame world number 66 Bethanie Mattek-Sands, who had defeated the 2011 champion Li Na in the second round, in two hours seven minutes.

Jankovic, a three-time semi-finalist at Roland Garros, dispatched Hampton in an hour and two minutes to set up a meeting with Sharapova in the next round.

Youzhny sent splinters spiralling into the air when he lost his cool after he slipped at a set and 3-0 down against Haas. 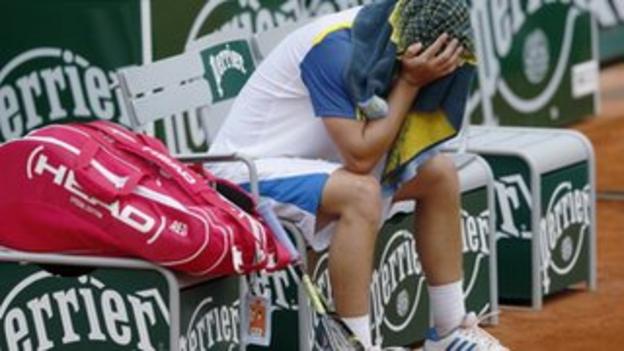 This is not totally out of character for the Russian, who smashed his racquet on his head so violently that blood poured onto the court during a match against Spain's Nicolas Almagro at Miami in 2008.

"In this situation you try to do everything that maybe can help you come back to the court. But I try this way; it doesn't help really," admitted Youzhny in the wake of defeat.

"I enjoy seeing some of that stuff, emotions, let it out there," said Haas of his opponent's furious reaction. "It's not always fun to just see somebody in a cool, cool state of mind. It's fun. It's nice. He's done some crazy stuff in the past, you know, when he hit the racquet on his head. I was not hoping for that again, but that was fun to see."

Yorkshire's Kyle Edmund, who reached the quarter-finals of the boys' event last year, is into the third round of this year's draw after overcoming Australian Bradley Mousley 6-1 5-7 6-3.

But there was disappointment for Dominic Inglot, who was Britain's last man standing in Paris, after he and his doubles partner Treat Huey fell to a 6-3 6-4 loss at the hands of French duo Michael Llodra and Nicolas Mahut in the third round.

"I was a little bit surprised. I was thinking she was kind of joking with me, so it was a little bit not maybe nice from her. Maybe she really had some problems. I don't know," Maria Kirilenko suggests that there may have been a little gamesmanship in Bethanie Mattek-Sands' decision to call for the doctor when 5-4 down in the opening set of their match.

"I remember the last conversation we had two weeks ago about Roland Garros. She told me, 'Listen, you have to focus, you have to give your attention to this tournament. This is a tournament you need to win.'," Novak Djokovic on his childhood coach and mentor, Jelena Gencic, who died on Saturday.

"To celebrate my birthday here on centre court in Paris is a very special moment for me," Rafael Nadal, who turned 27 today and was presented with a cake by the French Open organisers after his win over Kei Nishikori.

"I was happy to have clothes today to wear." Tommy Haas on his last-minute dash to find his playing shirts at his hotel after a mix-up at the Roland Garros laundry.

You can listen to live commentary of the ninth day of French Open action on BBC Radio 5 live sports extra.