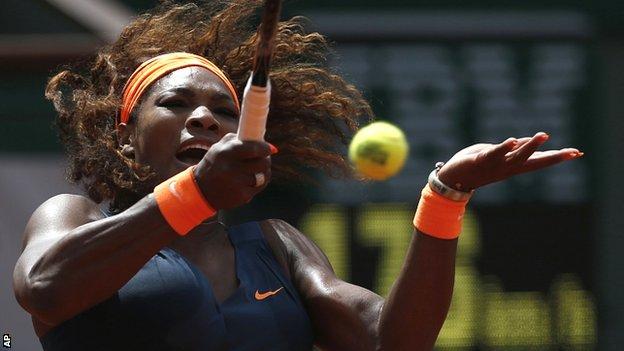 The world number one was tested in the second set but came through 6-1 6-3 on Court Philippe Chatrier and is yet to drop a set in the tournament.

In her four matches, the 31-year-old has only spent four hours and four minutes on court, and her serve remains the dominant shot in the women's draw.

She will play former champion Svetlana Kuznetsova in the last eight after the Russian edged past Angelique Kerber 6-4 4-6 6-3.

"It will be a good match," Williams said of the quarter-final.

"The last time we played here she won, so that will probably get her pumped up and she's on a comeback.

"She has nothing to lose but everything to gain. She also wants to do well, and she's won this tournament before."

The only thing counting against Williams in Paris seems to be history, as her one singles title came back in 2002 and she has not made the semi-finals for 10 years.

Kuznetsova is one of those who has previously thwarted the American's ambitions, having won their quarter-final in 2009 on the way to lifting the trophy, but Williams is in the form of her life this year.

She took her career-best winning streak to 28 matches against Vinci, the doubles world number one who posed a few different questions with her sliced backhand and drop shots, but little real threat.

A tentative start saw Williams rack up five unforced errors in the first game-and-a-half, and a double-fault offered up break point, but the American dismissed the danger with a backhand winner.

The clenched fist that followed suggested any early distraction had passed and Williams broke once again with a thumping smash that had Vinci leaping in vain to get a racquet on the ball.

If the first set was one-way traffic for 29 minutes, the second at least saw Williams tested.

A superb drop shot off a fizzing return at the start of the set showed that the top seed, too, could play with touch, and she needed to as Vinci began to mix up her game more.

Williams found herself stooping for short balls, with Vinci waiting at the net to pounce on any opportunity, and when she hammered one forehand only to see the Italian guide it back past her on the half-volley, her growing frustration was clear.

The American is determined to avoid the Paris pitfalls of previous years, however, and she ended Vinci's challenge with a swift break to love and a convincing hold to move into the quarter-finals for the fifth time.

"Every day everybody is like, 'You're on this streak,' but for me it's about winning the matches," said Williams.

"At the end of the day, I just want to hold up the winner's trophy and whatever it takes to get there."