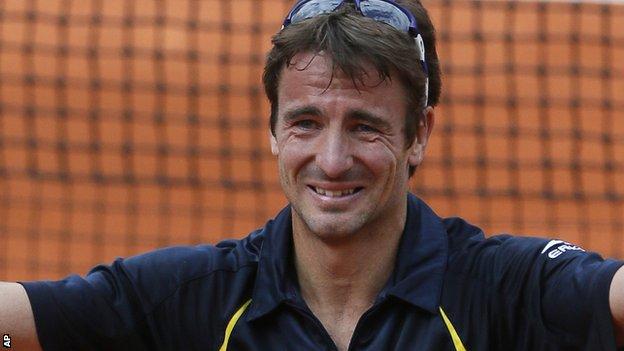 Spain's Tommy Robredo became the first player since 1927 to come back from two sets down in three consecutive Grand Slam matches.

Robredo, ranked 34 in the world, had already needed five sets to overcome Dutchman Igor Sijsling in the second round and Gael Monfils in round three.

Match of the day

Frenchman Henri Cochet is the only other man to come back from 0-2 down in three consecutive Grand Slam matches - he did so at Wimbledon 86 years ago.

The all-Spanish affair on Suzanne Lenglen lasted three hours and 49 minutes and the win means Robredo will play another compatriot, David Ferrer, in the quarter-finals.

"What is very important is that today I won this match," said Robredo. "I won a big match against a player who defeated me five times, and the rest is only records, for history.

"I played a player who is incredible on clay. I'm not thinking about history. History is this match I played today."

Eighth seed Angelique Kerber is out after she was beaten in three sets by Svetlana Kuznetsova.

The sixth seed only needed one hour and 45 minutes to secure the straight-sets win and reach the quarter-finals for the second successive year.

Troicki, the world number 57, offered little resistance and did not help himself by failing to convert any of the three break points which came his way.

Home favourite Tsonga will now play Roger Federer for the chance to reach the last four for the first time in his career.

David Ferrer made easy work of the 23rd seed Kevin Anderson with a three-set victory in one hour and 45 minutes and is yet to drop a set at this year's tournament.

Errani will now face Radwanska, who needed just one hour and 21 minutes to beat 14th seed and 2008 champion Ivanovic.

Four more Britons were in action at Roland Garros in the junior events with Katy Dunne and Kyle Edmund both winning.

"If we didn't know it already, professional tennis is becoming less of a young person's sport. "

Seventh seed Dunne needed just over an hour to secure her place in the second round, beating Croat Adrijan Lekaj 6-2 6-2.

The news was not so good for Luke Bambridge who was beaten 6-3 4-6 6-4 by Japan's Naoki Nakagawa.

While Cameron Norrie, who only switched allegiance from New Zealand to Britain last month, is also out after losing 7-5 6-2 to Christian Garin of Chile.

"Sometimes I can be very good, sometimes I just have bad days. I'm just a human being, maybe even more than other people. Just trying to do my job. And I don't care if I'm under or not under or flying or standing or whatever it is. I just go out there and try to play my game," Svetlana Kuznetsova when asked if she enjoys flying under the radar.

"Whenever we go to a restaurant, I'm like, 'Where's the food? Now, now, now.' And when you come to Europe, everything is slower and, like, more family based. You know, it could be better. So it's just we have to slow down and take a deep breath. And, you know, it's kind of funny how different the cultures are. Just completely opposite," Serena Williams examines the cultural differences between the US and Europe.

"Tennis doesn't owe me anything. Tennis is one of the fairest sports. It's given me so many extraordinary feelings," David Ferrer when asked if he thinks tennis owes him a Grand Slam title.