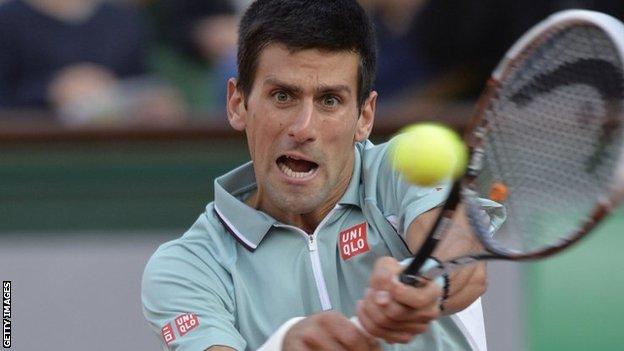 Novak Djokovic swept aside rising star Grigor Dimitrov at the French Open before later learning of the death of his former coach.

The world number one powered to a 6-2 6-2 6-3 win in the much-anticipated Saturday evening match at Roland Garros.

He was then told that Jelena Gencic had died, aged 77, and cancelled all post-match commitments because he was too upset.

Gencic had introduced the six-year-old Djokovic to tennis and coached him for five years, having previously worked with Monica Seles and Goran Ivanisevic.

Djokovic is not scheduled to return to action in Paris until Monday, when he will face German 16th seed Philipp Kohlschreiber.

He remains on collision course with Rafael Nadal in the semi-finals, after the seven-time champion beat Fabio Fognini 7-6 (7-5) 6-4 6-4 in the preceding match on Court Philippe Chatrier.

Having dropped sets in his first two matches, the seven-time champion made it through in three this time but was still far from his best, making 40 unforced errors over two hours and 45 minutes.

"If you don't fight when you have tough days or negative days, then you don't have all the chances for the future."

By the time Djokovic and Dimitrov took to Chatrier it was 7pm local time, and the prospect of an overnight delay loomed should the match become a drawn out affair.

Djokovic quickly set about avoiding that scenario with two breaks of serve in the first three Dimitrov service games.

Bulgarian Dimitrov has long been touted as a future number one, and the win over Djokovic in Madrid last month only heightened expectations around him, but he was playing in the third round of a Grand Slam for the first time and it showed.

Seventeen unforced errors in a ragged first set were followed by a wayward smash that gifted Djokovic a break early in the second, after the Serb had set it up with a rasping forehand.

The only interruption to Djokovic's progress was a Mexican Wave as the crowd amused themselves in the absence of a real contest in front of them.

Dimitrov had treatment to his shoulder in the second set and Djokovic followed suit at 4-3 in the third, but the Bulgarian was unable to put any pressure on as the errors continued to flow.

A flowing Dimitrov backhand winner and a thumping forehand down the line saved the first two match points, and gave a glimpse of his talent, but a loose backhand on the fourth match point ended the match after an unexpectedly brief one hour and 44 minutes.