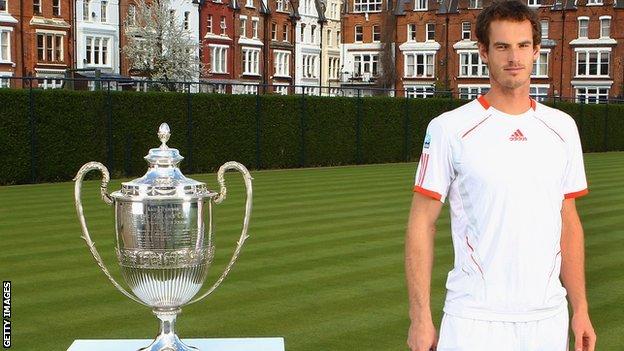 The BBC will have live coverage from the French Open, Queen's Club, Eastbourne and Wimbledon this summer.

In mid-June, BBC Sport also brings you an exclusive behind-the-scenes documentary on the life of Andy Murray - witness what it takes on and off the court to compete as a global sports star.

Times stated below are subject to change, and full details will appear here in due course.

- Live text commentaries throughout each day on the BBC Sport website

Sue Barker presents live coverage from west London as the most prestigious Wimbledon warm-up event in the men's game begins to reach its climax.

Britain's US Open and Olympic champion Andy Murray had to withdraw from the 2013 French Open because of a troublesome back injury, but he will be determined to be fit and firing in the later stages of this year's Aegon Queen's Club Championships - a tournament he won in 2009 and 2011.

Andy Murray: The Man Behind the Racquet (18 June)

Andy Murray, US Open and Olympic champion, allows the BBC into his inner sanctum to witness what it takes on and off the court to compete as a global sports star.

This is Andy Murray as you've never seen him before - from an open-top bus in home town Dunblane to pilates in Miami, from ice baths in Monte Carlo to injury rehabilitation in Surrey with Kim and his dogs. With fashion shoots, charity and media work along the way, we get a glimpse into the life of a private man, a shy Scot who won a nation's heart with his raw emotion at Wimbledon, and then their eternal admiration by winning the US Open to become Britain's first male Grand Slam champion in 76 years.

John Inverdale presents live coverage from the south coast of England as the main women's warm-up event for Wimbledon gets under way.

In last year's final, Austria's Tamira Paszek beat Germany's Angelique Kerber in three sets. This time around talented young British hopefuls Heather Watson and Laura Robson will both hope to advance further as they bid to continue the impressive progress they have made in the SW19 spotlight in recent years.

Sue Barker and John Inverdale introduce live coverage from the opening day of the 2013 Wimbledon Championships at the All England Lawn Tennis Club.

Defending champion Roger Federer is targeting a record-breaking eighth Wimbledon win this year, while the USA's Serena Williams is looking to claim the women's singles title for the sixth time.

BBC Sport also brings you a look back at last year's tournament, screening on the eve of Wimbledon 2013.