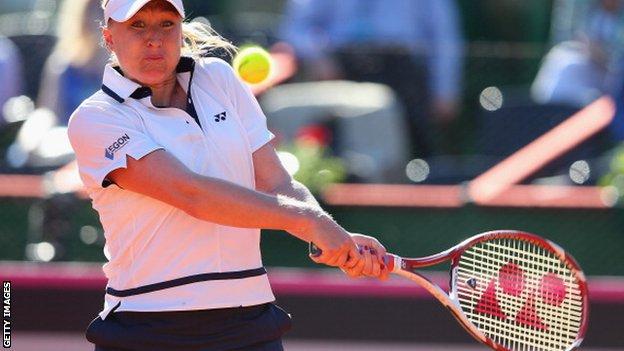 Former British number one Elena Baltacha made a winning return to the WTA Tour by progressing to the second round of the Brussels Open.

The 29-year-old Scot required foot surgery in October and has slipped to 234 in the world rankings after nearly 10 months out of the game.

"I really missed competing - that was probably the biggest thing I missed," Baltacha said.

"I've come back with a completely different attitude. I really missed the one-on-one competition. I'm enjoying it more and more. I feel lucky to be back. It's a real honour to be back."

Baltacha, who received a wildcard to play in Brussels, took the opening set after a lengthy tie-break and won five straight games in the second.

The Briton made her competitive return at an before featuring in Great Britain's Fed Cup defeat by Argentina in April.

She lost in the first round in Charlottesville, USA, and reached the last 16 of another ITF tournament in Saint Gaudens, France.