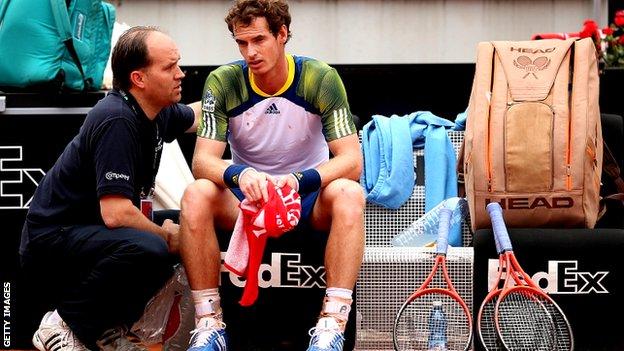 Andy Murray has withdrawn from the French Open with the back injury that forced him out in Italy last week.

Britain's world number two retired in his first match in Rome and has opted against playing on the Paris clay.

Murray will hope to be fit for the start of the grass-court season at Queen's Club on 10 June.

"It's been a really tough decision, and I love playing in Paris, but after seeking medical advice I'm not fit to compete," said the US Open champion.

"Apologies to the organisers and thanks to everyone for the messages of support. Now my complete focus is on getting back on the court as soon as possible."

It will be the first Grand Slam tournament Murray has missed since Wimbledon in 2007.

The French Open, the second Grand Slam of the year, starts at Roland Garros on Sunday.

Murray looked troubled throughout his match with Marcel Granollers on his 26th birthday in Rome. He withdrew with a lower-back problem after winning a tie-break to square the match at one set all.

At the time the Scot said he would be "very surprised" if he would be fit for the French Open.

His only previous mid-match retirement coincidentally came on his 20th birthday, when he snapped a tendon in his wrist at the 2007 Hamburg Masters.

"There is something about the way of playing on a clay court, the extra sliding, the extra rotation of the body, the harder ground-strokes to push the ball through the surface, which is clearly having an impact.

"For Murray to protect the body for the long term, he has to take wise and precautious decisions like the one he's taken."

That was the most serious injury Murray has suffered and led to him missing both the French Open and Wimbledon.

Murray struggled with a lower-back problem throughout the clay season last year. One match against Jarkko Nieminen during the French Open prompted former Wimbledon champion Virginia Wade to call him a "drama queen".

He had injections before Wimbledon but said the problem returned in Madrid two weeks ago and did not improve with rest.

"Until Madrid, it had been OK but it's not been perfect for a long period," Murray said at the Italian Open. "You always go into matches with little niggles and such, but it's frustrating when for a long period you're hurting.

"It's been an issue for a while now and I want to make sure it goes away. It's not enjoyable when you're playing in pain."

Murray reached the Roland Garros quarter-finals last year, losing to David Ferrer, before reaching his first Wimbledon final, winning Olympic gold back at SW19, and clinching his first Grand Slam at the US Open.

184 comments
Back to top
unknown