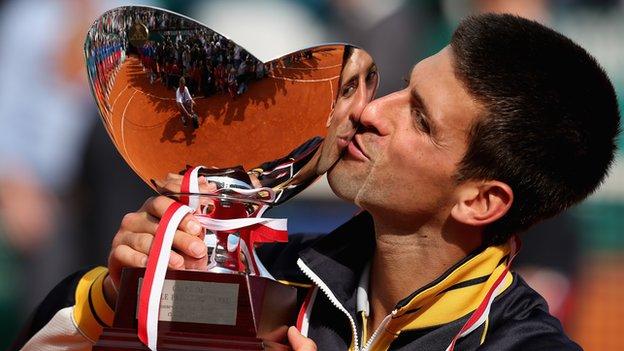 "I cannot ask for a better start to my clay season," said Djokovic.

Djokovic had struggled with an ankle injury during the early rounds but showed no signs of any ailment as he dominated the early stages of the final.

"I did not know if I was going to be a part of the tournament this year. I made a decision to play and, right now, it's the best decision of my life," he said.

In their first meeting since Nadal's French Open final win in June, Djokovic secured the first set after storming into a 5-0 lead, with Nadal having no answer to his opponent's brilliance.

In a tight second set, Djokovic recovered from going an early break behind but was broken again by a defiant Nadal as the Spaniard moved to within a game of levelling.

However, Djokovic broke straight back to force the tie-break, which he took comfortably 7-1 as Nadal's bid for a ninth straight title ended in failure.

Nadal is still working his way back to his best form after returning from an eight-month lay-off due to injury and illness in February.

"Congratulations Novak, what you're doing is just amazing. Congratulations to you for winning my favourite tournament," he said at the presentation ceremony.