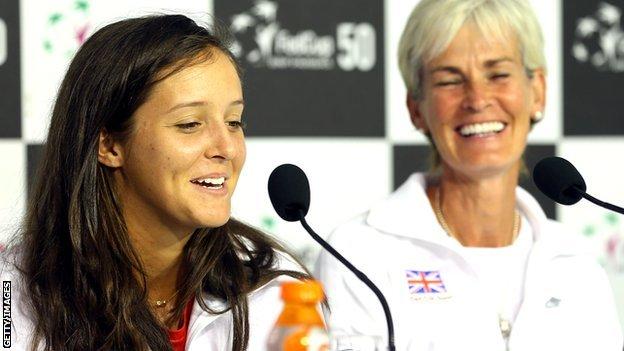 The difficulty of getting into one of the best steakhouses in Buenos Aires doesn't just lie with the quality of its beef.

It's listed in every guidebook, meaning most tourists have stood hopefully on the pavement, waiting for a table which rarely comes, watching a waitress wield a clipboard with an alarming sense of superiority.

Thankfully the British Fed Cup team, here in Argentina for their Fed Cup promotion play-off, have friends in high places.

Tito Vasquez, a former Davis Cup captain for Argentina, worked for the LTA for seven years and pulled the necessary strings to get them in.

A memorable night followed - just one of the social occasions planned by captain Judy Murray to engender team spirit - culminating in a tower of lollipops which were impressively resisted by her athletes.

"She's absolutely nuts, Judy! She's great fun to be around and there's been a lot of laughing around all the tough practice sessions"

"Judy's a brilliant captain. She's the glue which holds us all together," says Johanna Konta who opens the tie for Britain against Argentina's number one Paula Ormachea on Saturday. "She brings such as positive and energetic atmosphere, so all the girls feed off that. It's been a lot of fun."

Anne Keothavong has a slightly different take: "She's absolutely nuts, Judy! She's great fun to be around and there's been a lot of laughing, around all the tough practice sessions."

Murray is now in a position of considerable power and influence at a time of great change in British tennis and realises how important winning this weekend could be.

"The prize for us would be a place in the World Group, which would be an enormous opportunity for women's tennis in Britain," she told BBC Sport.

"Basically if you don't get out of the Euro Africa zone in February you don't play again until the next February.

"So it's really important to get a win here because it would mean that in 2014 we would have three home or away ties in the World Group, which would be huge in terms of the profile of Fed Cup and growing women's tennis in Britain."

Almost as passionate as her desire to get more girls playing the sport is her quest to increase the number of female coaches in Britain. That's why she's invited out a group of British performance coaches from centres such as Exeter and Bolton to get a flavour of every aspect of a top-level event.

Murray believes that if the coaches better understand what life is like at the top - everything from physical preparation, to training drills to media work - it can only assist with their development work back home with junior talent.

She may like steaks, cakes and laughs, but Murray knows what she's talking about when it comes to tennis. It would make a whole heap of sense to have her on the board of the governing body, the LTA (especially as she's just been invited onto the board of the Scottish Rugby Union for her external perspective.)

NB: From left to right

Her number one player, Laura Robson, has a big weekend ahead. A ranking of 38 suggests she is the standout player on either side but her challenge will be to find the right balance between her natural, aggressive and flat game, and the tactical spins and slices which could be effective against the Argentina clay-courters.

Paula Ormaechea, with a ranking of 143, and Florencia Molinero, 224, play singles for an Argentina team significantly weaker since the retirement of Gisela Dulko. Ormaechea is comfortably their best player and British coaches reckon she is handier than her ranking suggests.

Watching and supporting GB from the team bench will be Elena Baltacha who, after nine months out, has just played her first competitive match since the Olympics.

This tie has come too soon for her to be considered for the singles but Baltacha, the number one player in this team a year ago, is just delighted to be back after foot surgery.

"I wanted to see how the rehab went because I wasn't sure whether I had the stomach to go through all that again after so many surgeries," Baltacha told BBC Sport. "But I really missed it and I got that excitement back and the hunger, and I realised how much I actually love tennis."

She wasn't named for any of the rubbers at Friday's draw ceremony but captain Murray has the option of making changes on the final day if necessary. As things stand, Keothavong will partner Robson in the deciding doubles should that be necessary.

"If it comes to the deciding doubles we'll be in their faces and showing them how it's done," said Keothavong, with her usual matter-of-factness.

Hopefully it won't come to a decider because rankings would suggest Britain are reasonable favourites, but the leveller will be the conditions. Slow court, heavy balls, hot temperatures.

Fair to say not it is far from ideal for any member of the British team? "Hang on," jokes Laura Robson, as two members of the UK press corps chat to the team by the court. "I've made semi-finals in Palermo and that's the ultimate clay result for me."

Although two wins on clay in Argentina to win Fed Cup promotion would surely knock that achievement down a peg.