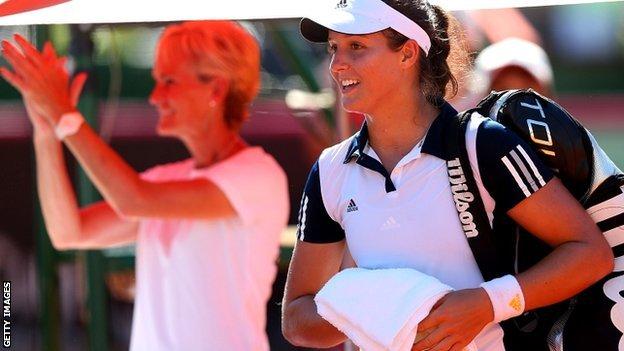 Laura Robson brought Great Britain level at 1-1 in their Fed Cup tie against Argentina with victory over Florencia Molinero in Buenos Aires.

Robson won 6-1 6-1 on the clay after Paula Ormaechea beat Johanna Konta 6-3 6-2 in the opening rubber of the World Group II play-off at the Parque Roca.

The best-of-five tie will be decided by the reverse singles and potentially decisive doubles on Sunday.

Laura Robson produced a ruthless performance to set up the final day perfectly. Johanna Konta had made a nervous start on her Fed Cup singles debut and, despite a brief first set comeback, was well beaten by Paola Ormaechea.

If there was pressure on Robson, it didn't show. A couple of dodgy double faults apart, she struck the ball well against the lowly ranked Florencia Molinero and the result was never in doubt.

Robson was in great spirits afterwards, setting forfeit challenges for the coaches in the event of victory, and she should be confident of being the star of the tie.

Captain Judy Murray has chosen Robson and Anne Keothavong for the doubles.

"We are probably where we expected to be," said Murray.

"Johanna played against a very tricky Paula Ormachea, the Argentine number one. Jo made a very good debut, it's not easy to come out at 10am against a partisan crowd with all that noise and their brass band.

"Then Laura absolutely destroyed Molinero to even things up and we're looking forward to tomorrow, it's all to play for."

The winner of the tie will join the eight-nation World Group II in 2014.

British number two Heather Watson is absent as she recovers from glandular fever and Elena Baltacha is in the squad but has only just returned from eight months out with a foot injury.

Konta, who was born in Australia but lives in Eastbourne, had previously played two doubles rubbers for Great Britain but the 21-year-old made a nervous start to her singles debut.

Ormaechea, 20, is ranked 21 places higher at 143 in the world and reached a WTA final on clay in Bogota earlier this year, so it was no great surprise that she looked much the more comfortable on the surface.

The Argentine raced into a 4-0 lead and, although Konta managed to claw back one of the breaks, Ormaechea held on to take the first set.

After saving a couple of break points at the start of the second, Ormaechea got the decisive break when the Briton sent a backhand long in game four, and she broke once again to seal victory in one hour and 12 minutes.

"It was a great experience being out there today and a real honour to represent GB," said Konta. "I didn't get off to the best of starts but found my rhythm after the first four games and played better after that."

Konta's defeat put the pressure on Robson in the second singles and, although a ranking advantage of 186 places suggested she should win with plenty to spare, it was still an impressive effort from the 19-year-old Londoner.

Robson came through a couple of tricky games at 3-1 and 5-1 as the double-faults that have plagued her recently returned, but she held her nerve to see out the set and swept into a 5-0 lead in the second.

The Briton was broken when serving for the match but made amends in the following game, and will hope for a similar performance against Ormaechea in the opening rubber on Sunday.

"I was very pleased with how I played," said Robson.

"I stuck to my game plan and hitting some higher balls to her backhand and, apart from a few double faults, nothing to complain about. It's 1-1 going into tomorrow, it's going to be tough, but we can totally do this."

After day one of the Fed Cup semi-finals, Italy lead the Czech Republic 2-0 in Palermo, while Slovakia are 2-0 up on Russia in Moscow.