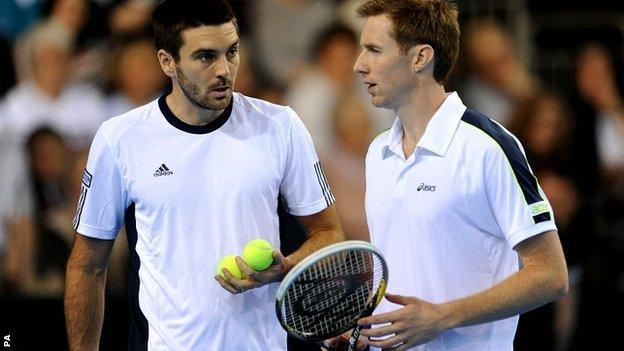 Colin Fleming and Jonny Marray kept Britain's hopes alive with victory in the doubles to leave Russia leading 2-1 after two days of their Davis Cup tie.

The British pair beat Igor Kunitsyn and Victor Baluda 6-1 6-4 6-2 in the third rubber of the Euro/Africa Group One tie at Coventry's Ricoh Arena.

Leon Smith's side must win both singles rubbers on Sunday to earn a World Group play-off in September.

"Colin Fleming and Jonny Marray illustrated their clear superiority in very entertaining style in a match which lasted only 89 minutes.

"They lobbed and volleyed superbly and only conceded 12 points on serve in the entire match - with Marray's half-volley forehand from just inside the baseline providing the champagne moment.

"This was an expected win, but after losing both of Friday's singles, the odds are very much against both Ward and Evans winning their Sunday singles."

James Ward and Dan Evans both lost in five sets on the opening day.

After failing to earn a point on Friday despite eight dramatic hours on court, captain Smith enjoyed a less draining afternoon on Saturday.

"It's going to be very tough tomorrow but I think the guys did a very good job today of making sure it does go into Sunday in a live situation," said Smith.

"What we saw yesterday is that anything's possible. We were very, very close to getting one and maybe two rubbers on the board, and from that we can take a huge amount of confidence."

While the home side are very much underdogs in the singles matches Fleming and Marray showed why they were strong favourites in the doubles.

Scotland's Fleming is ranked 28th in the world, while Englishman Marray is the reigning Wimbledon doubles champion and 16th in the rankings.

In contrast, Kunitsyn, 31, had won just one of five previous Davis Cup matches and Baluda, 20, was making his debut in the competition and playing his first doubles match of 2013.

It showed from the early stages as the Britons looked much the sharper, two breaks easing them through the first set in 27 minutes.

Marray was making his Davis Cup debut at the age of 32, stepping in for who is recovering from cancer, and his backhand return dropped on the line to earn another break in game three of the second set.

Fleming, 28, served it out after 61 minutes when Marray thumped away a comfortable smash, and when Baluda was broken at the start of the third, the contest was as good as over.

An ace from Fleming wrapped things up in just under an hour and a half, and afterwards the Scot dedicated the victory to his regular doubles partner Hutchins.

"I absolutely loved it," Marray told the LTA website.

"The atmosphere was great and just walking out here with the GB name on the back is a great feeling. It's something I always wanted through my career, so it's a goal achieved, and obviously with a convincing win as well it was a great day for me."

"We saw yesterday how close the boys were and how well they played," said Fleming.

"So if they come out tomorrow and do the same again, and we can take the support to another level, hopefully we can push James over the line.