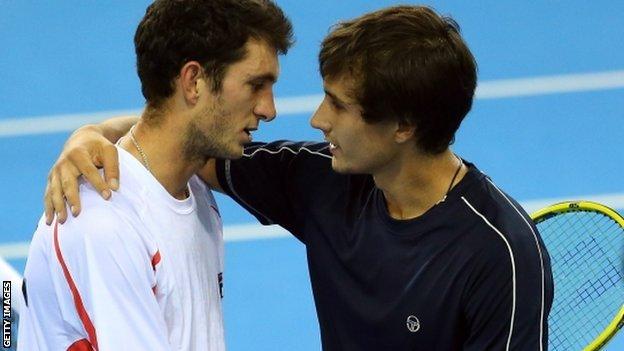 Russia moved into a 2-0 lead against Great Britain in the Davis Cup despite some plucky play from the hosts at Coventry's Ricoh Arena.

Jonny Marray and Colin Fleming take on Igor Kunitsyn and Victor Baluda in the doubles on Saturday.

British hopes now lie with the pair, ranked 17th and 28th in the world respectively, if captain Leon Smith's side have a chance of salvaging the tie on Sunday.

The team are without their best player as world number two Andy Murray opted to miss the Euro/Africa Zone Group One tie as he prepares for the clay-court season.

Evans was only in the team following a change of heart from Smith, who had initially overlooked the 22-year-old from Birmingham in favour of British number three Jamie Baker.

Smith's late decision was vindicated as Evans played well above his ranking of 325, without quite being able to match his surprise wins against Slovakia last year.

He twice fought back from a set down, after double faults at key moments had given Tursunov the lead, but the 30-year-old Russian had too much in the final set.

"Dan Evans and James Ward have no reason to reproach themselves but Ward in particular missed a golden opportunity for victory and Britain now face a colossal task to win this tie.

Evans showed great tenacity and skill to take Dmitry Tursunov to five sets - clearly justifying Leon Smith's decision to draft him into the team at the last minute.

Ward served like a dream for the opening two sets but visibly tired late on against the admirable Evgeny Donskoy, as Britain's hopes of victory virtually disappeared in another five-setter."

The pair swapped early breaks of serve in the decider before Tursunov, a former world top 20 player with seven ATP titles to his name, pulled away at 4-2 and closed out the win after three hours and 56 minutes.

Ward, 26, also had to face bridging a considerable gap in terms of ranking points against Donskoy, the world number 80 who had shown his talent by taking Murray to three sets at Indian Wells last month.

But the Londoner made a storming start, racing to a two-set lead largely thanks to some heavy serving and powerful, flat hitting.

Donskoy lost his serve in the opening game of the third set but this time the Russian fought back, levelling the set at 2-2 before breaking Ward in the 12th game.

The home fans among the near 3,000-strong crowd who had stayed on into the evening did their best to rouse Ward but the Russian had hit form and soon wrapped up the fourth set to send the match into a decider.

The fifth set provided a tense, see-sawing climax to the day as both players fought hard.

Ward saved two break points at 3-3 and put pressure on the Russian's serve, but it was the British player who finally succumbed as Donsky broke him at 7-6 before serving out the match to give Russia the upper hand.

Ward, who sobbed into his towel at the end of the match, said: "It's difficult because I was out there for so long and giving everything. It's always difficult to come out on the losing side but I'll try to take the positives from it.

"The tie's not over, the guys are going to go out and give a good performance tomorrow and hopefully win the doubles. It was two tight matches today so it's definitely possible to turn it round on Sunday."

Evans again showed the talent he possesses, but admitted afterwards that his own lack of application has prevented him from progressing further in the sport.

"I know why," he said. "It's because I don't train hard enough and don't work hard enough day in and day out. I'm obviously pretty bad at my job. It's up to me, it's not up to anyone else.

"I want to push on. It's not that I don't want to do it, I obviously want to do it. It's just for whatever reasons, distractions - I need to stay there and just play tennis and that's it.

"It's easier said than done. Thousands of people have told me to do it but I'm yet to do it for a sustained period of time. When I do do it, I obviously play pretty well. I definitely think I will be top 100, and I still think that."

In the World Group quarter-finals, the Czech Republic lead Kazakhstan 2-0, France are tied 1-1 with Argentina, Serbia are level at 1-1 with the United States, while Canada are also at 1-1 against Italy.