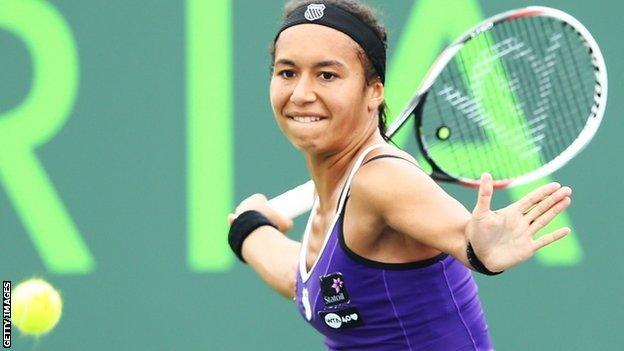 British number one Heather Watson has been diagnosed with glandular fever.

The 20-year-old has had a string of early-round exits of late and in March announced that she would take a break from the sport, before reversing the decision 24 hours later.

"After an impressive rise up the rankings to the brink of a Grand Slam seeding, Watson has struggled in recent weeks. Her last four defeats have been to players ranked below her. She talked about a curious lack of energy in matches at the Australian Open two months ago and now we know why. She has felt exhausted for months with blood tests showing she's at the tail end of a bout of glandular fever. While there's no news on how long her recovery will take, she has been advised to rest completely. Glandular fever has the ability to hit athletes hard. The Swedish top 10 player Robin Soderling hasn't played for almost two years after contracting a particularly vicious strain of the virus. Everyone in tennis wishes Heather well and a much speedier return."

Blood tests have revealed traces of the virus, although doctors say she is at the tail-end of the fever.

Watson said: "I am relieved to know what is wrong so that I can get myself on the mend."

Watson, who reached the third round of the Australian Open in January, lost in the first round in Indian Wells and Miami.

The Briton then pulled out of this week's WTA tournament in Charleston, South Carolina, with a leg injury and returned home to recover.

"I had to do some blood tests after Miami and the results have shown that I have traces of Glandular Fever in my system," she added.

"There is no prescription for this other than complete rest but the good news is that the doctors have told me I am at the tail end of the fever.

"This means I have been trying to compete through the symptoms for some time.

"I have been struggling with both training and playing matches and felt so tired and exhausted for months.

"But now that the doctors have found the cause of this, it explains everything that has been happening to me physically and mentally.

"I hope to recover as soon as possible by resting my body and getting lots of sleep."

"Some people literally recover in two weeks but some people take four to five to six months, although that is very unusual," said Farrell.

"If she has been clinically diagnosed with this disease she should make a proper recovery. In all likeliness she will recover and be back to perfectly normal within weeks to months."