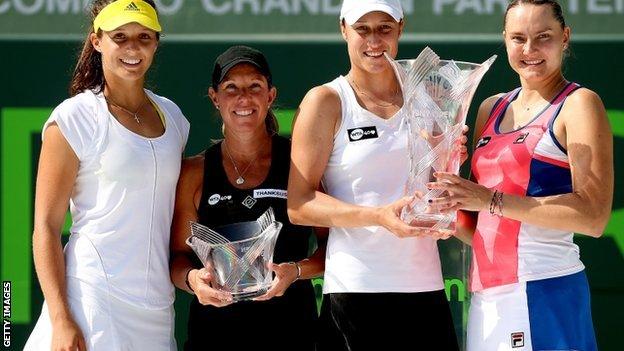 Laura Robson's run to the Sony Open doubles final ended in disappointment as she and Lisa Raymond were beaten by Nadia Petrova and Katarina Srebotnik.

Briton Robson, 19, and American Raymond, 39, were beaten in 70 minutes in Miami, with the victorious pair converting five of 10 break points.

Laura Robson and Lisa Raymond couldn't quite join Andy Murray in the winners' circle, but they had a fantastic week together, beating the world number one doubles pair in the semi-finals. To watch them together afterwards, joking about their mutual love of horror films and 80's music, suggested that this is a combination that can endure, despite their 20-year age gap.

Following the match, Robson told BBC Radio 5 live that she will play with Raymond in the doubles at Wimbledon.

"I thought we played amazingly well, seeing as it was only our first tournament together," said the teenager. "I think we have so much to improve on in the future and I think we can do really well, especially on grass."

Raymond added: "I love this partnership and I need to play with somebody who is fully committed to the doubles and going to play a full schedule, because I think it's important to be on the court together as much as possible and gain that momentum."

Robson, whose current doubles ranking of 248 will improve significantly on Monday, had indicated she would be keen to play alongside the American again after a successful week together, which included a semi-final win over top seeds Sara Errani and Roberta Vinci.

Raymond has won 79 doubles tournaments, including six Grand Slam titles, since turning professional in 1993. Robson, by contrast, had been playing in her first WTA doubles final.

The pair both head to Charleston next for the WTA event, which gets under way on Monday.