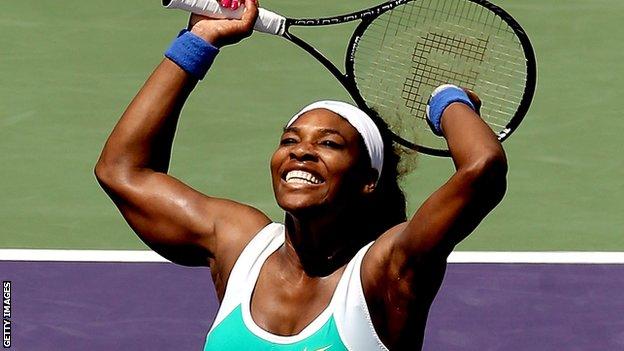 Serena Williams won a record sixth Miami title as she came from a set and a break down to beat Maria Sharapova 4-6 6-3 6-0 in the Sony Open final.

The American, 31, reeled off 10 games in a row to record an 11th straight win against the world number two.

Sharapova, 25, has still to win in Miami after losing her fifth final.

She converted all seven of the break points she created to continue her dominance over Sharapova, whose only two wins in their 14 meetings were in 2004.

When Serena Williams hits the sort of form she found from a set and 3-2 down she is utterly unplayable. Up until that point, Sharapova was by far the better payer, and looked on course for her first win over the American in nine years, and her first Miami title. She went toe to toe with the world number one and came out on top in many of the rallies, but Williams reacted like a boxer out-pointed for eight rounds, who turns the tables with a few big haymakers. Sharapova wobbled and never recovered, with Williams winning 10 games in a row to lift the title for a sixth time.

"It's obviously disappointing to end a really nice month like this, but Serena played a great match," said the Russian, who won at Indian Wells two weeks ago.

"I am sure we will be playing each other a few more times this year."

The Russian took her great form into the opening set, almost breaking Williams in a marathon third game featuring some outstanding baseline rallies.

Sharapova, playing sparkling all-round tennis, got her reward when she broke to go 3-2 up with a powerful backhand that Williams could only return into the net.

Williams broke back immediately but a confident Sharapova took advantage of some over-hitting from the world number one to break in the ninth game and serve out to win the set.

Having won her first set against Williams since 2008, Sharapova appeared to be on course to finally end her nine-year barren run against the 15-time major champion.

But after falling 3-2 behind in the second set, Williams surged back, a double-fault from Sharapova handing her a break point in the eighth game which she converted and then served out to force the decider.

The match turned decisively in Williams' favour when Sharapova produced two double-faults to slip 3-0 down, and there was no way back.

"She definitely pushed me," Williams said. "I thought she did a really good job but I felt good and it feels good to have (title) number six."