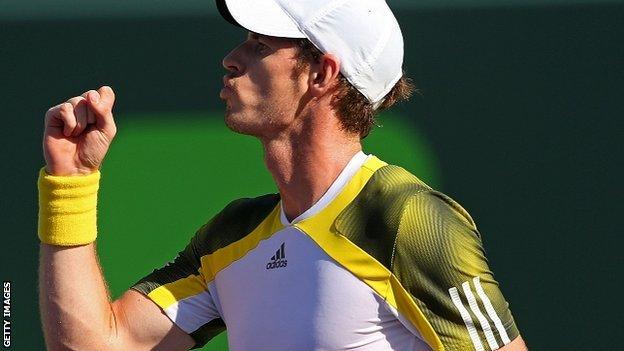 Andy Murray advanced to the semi-finals of the Sony Open in Miami with a straight-sets victory over Marin Cilic.

Murray, 25, lost his opening service game to the Croat but fought back to take the opening set 6-4 before impressively winning the second 6-3.

A slow start and a nervy end, but in between Murray played his best tennis of the week to win his eighth match in nine against Cilic.

When he squandered four break points in the first game, and then got broken himself a game later, it looked a little ominous, but the Croatian didn't really find any form until the second set, and by then he was a set and a break down.

A pulsating, break point laden fourth game in the second set was held by Murray, who punched the air, and although he needed seven match points to earn his place in the semi-finals, the result was never really in doubt.

Second seed Murray is the highest seed left in the event, and he will now play Richard Gasquet on Friday after the Frenchman beat Tomas Berdych 6-3 6-3.

Tommy Haas will take on David Ferrer in the other semi-final.

Murray, who won the Miami title in 2009 and lost to Novak Djokovic in last year's final, will overtake Roger Federer to go second in the world rankings if he is victorious at the Florida tournament.

The US Open champion was far from clinical, though, taking only six of the 18 break points he created. But he had enough to see off an opponent who made 37 unforced errors (compared to Murray's 20) in an encounter that lasted one hour and 42 minutes.

The Scot allowed four break points to slip away in the opening game before his 24-year-old opponent finally held serve.

Cilic stepped it up in the second game to break and lead 2-0 before Murray hit back immediately.

Both players continued to struggle on their own serve and two more breaks followed, leaving the set effectively on serve at 3-2 to Cilic.

At 4-4, Murray broke decisively and managed to serve out the set before again getting the better of Cilic's serve in the opening game of the second.

The British number one had to battle for more than 15 minutes as he held for a 3-1 lead and the pair traded breaks to reach 5-3, with Cilic serving to stay in the match.

As in the first game 90 minutes previously, Murray squandered a 0-40 lead as his opponent forced his way back to deuce.

Three more match points came and went before Murray finally got over the line.

"I think it was a very good match after the first few games, from my side," said Murray.

"Obviously I had 0-40 in the first game, didn't get it and went a break behind but every time I got broken, I think I broke straight back.

"I came back well from the setbacks and used good variation to keep him off-balance.

"It was a tough match, it was hot and we had some long points, long games, and I'm glad I came through in two sets."

Murray's next opponent Gasquet, seeded eight, was in impressive form against fourth seed Berdych, the 2010 runner-up, firing 17 winners in a 74-minute victory to avenge a defeat by the Czech in the last 16 at Indian Wells earlier this month.

The 26-year-old has lost four of his seven matches with Murray, the most recent of which was in the round of 16 on the clay at last year's French Open.