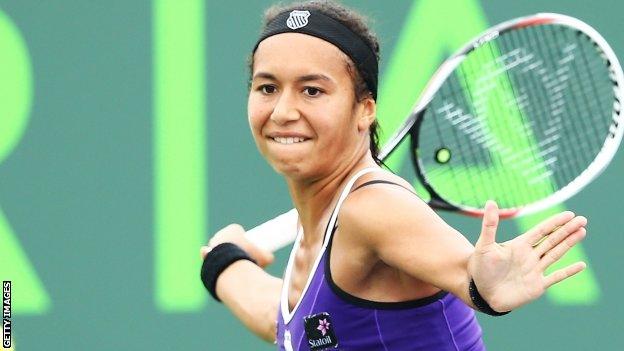 Heather Watson will miss next week's WTA tournament in Charleston, South Carolina, with a leg injury.

Her agent says she is being treated at the National Tennis Centre and should be fit in time for the Fed Cup Group II play-off in Argentina on 20 April.

The 20-year-old British number one announced earlier this month she had planned to take a break before changing her mind within 24 hours.

The 19-year-old Robson missed the chance to take the number one spot from Watson after suffering a second-round defeat at the Miami Masters.

Watson fell at the first hurdle in that event and then stated in an interview she was "burnt out" and was going to take a break from tennis.

But less than a day later, she clarified what she actually meant: "I think after my match I just wasn't thinking straight and said things that could be interpreted in the wrong way,"

"When I said I was burnt out and wanted to take a break, I meant I wanted to go home to Guernsey for a few days.

"I haven't been home to Guernsey since I left in December. I basically just want to put my racquet down for three or four days, have a rest and see my friends and family, as I haven't done that this year yet."