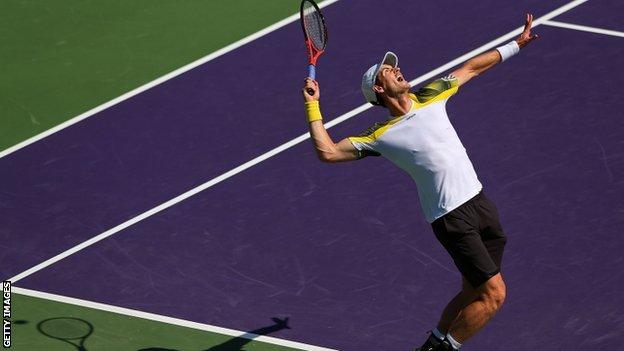 Andy Murray came out of the blocks firing as he swept aside Italy's Andreas Seppi to reach the quarter-finals of the Sony Open in Miami.

The Briton had struggled in the early stages of his but this time broke early on his way to a 6-2 6-4 win.

Murray will play Croatia's Marin Cilic, the world number 11, in the last eight.

He is the highest seed remaining in the tournament after Novak Djokovicsuffered a shock defeat by Tommy Haas.

World number one Serena Williams,chasing a record sixth title in Key Biscayne, beat fifth seed Na Li of China 6-3 7-6 (7-5) in one hour and 50 minutes to reach the semi-finals.

Murray will replace Roger Federer as the world number two if he wins the tournament and took another step in that direction with a solid performance against Seppi.

The Scot, 25, was not threatened as he made 60% of first serves in the opening set, and created opportunities in each of Seppi's service games, breaking twice.

Seppi, ranked 19th, did not have the firepower to trouble the US Open champion and it took until the first game of the second set for the Italian to hit his first winner.

It helped him see off three more break points, and Seppi made the second seed work a little harder until 4-4 when a forehand into the net handed over the third break of the match.

Murray almost faltered at the last, double-faulting at 30-30 to give Seppi his first break point of the day, but a first serve got him out of trouble and he wrapped up victory in one hour and 26 minutes.

Next for Murray is a quarter-final against Cilic, who beat sixth seed Jo-Wilfried Tsonga 7-5 7-6 (7-4). The Scot has a 7-1 record in previous matches against Cilic.

Djokovic, the defending champion, was completely outplayed by Hass in a 6-2 6-4 loss. The German ended the Serb's 14-match winning streak at the tournament and inflicted only his second defeat of the season.