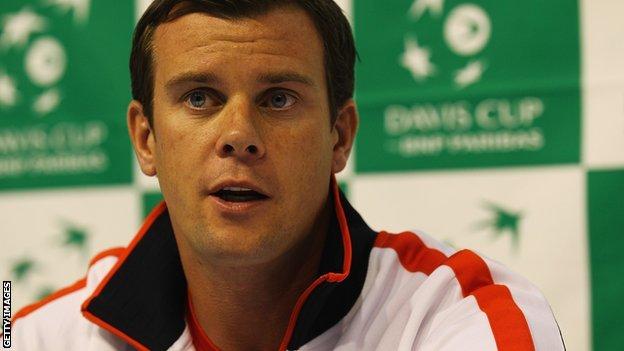 Ward and Baker, ranked 208th and 209th respectively, will contest the singles rubbers in the tie at Coventry's Ricoh Arena on 5-7 April.

Fleming will team up with 2012 Wimbledon champion Marray in the doubles rubber on Saturday.

British number one Andy Murray will be absent to prepare for the French Open.

Fleming's regular doubles partner, Ross Hutchins, is currently undergoing cancer treatment, while Smith has overlooked Dan Evans, who played in the last two ties and was the hero in Britain's surprise win over Slovakia.

"It's great to have Jamie Baker back in the team after him starting the year so well in qualifying at Australian Open in January," said Smith.

"James Ward has done fantastically well to come back from a long-term injury sustained last year and brings a lot of Davis Cup experience to the team having played in six of the last seven ties for his country.

"Colin Fleming has had a great start to 2013, winning ATP titles in both Auckland and Marseille. In Jonny Marray we have the current Wimbledon doubles champion who also went on to reach the semi-finals of the Barclays ATP World Tour Finals at the end of last year.

"We look forward to the challenge of competing against a very strong Russian side and, with the advantage of a home crowd supporting the team, we hope we can make life as difficult as possible for the opposition."

The winner of the tie will go forward to a World Group play-off in September.