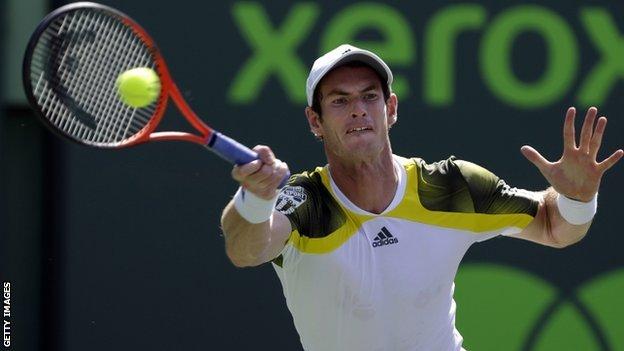 Andy Murray opened his Miami Masters campaign with a routine 6-3 6-1 victory over an out-of-sorts Bernard Tomic.

Tomic, ranked 45th in the world, forced three break points early in the match, but the Australian faded badly as Murray won in 56 minutes.

"Once I got ahead, I played consistently. I served pretty well and didn't give him too many opportunities," Murray told BBC 5 live.

If he wins the title, he will be world number two ahead of Roger Federer.

Tomic, who beat five higher-ranked players en route to an impressive tournament win in Sydney in January, was jeered by some of the Miami crowd as he surrendered the match in meek fashion.

After initially applying pressure to Murray's serve in the first set, the 20-year-old's game crumbled and his movement around the court slowed.

"A few days ago I got sick," he admitted afterwards.

"I felt OK until I started to warm up. My body didn't react well and I found it difficult to breathe. Andy played well and against a player like that you have to play well, but unfortunately I didn't have the game to do that."

The Australian handed Murray a break in the fourth game of the second set with successive double faults, before slipping 5-1 behind as he lost his serve again.

"I'm sure Andy is wondering what has happened to Bernard Tomic as well. Andy Murray is a competitor, he does not want to win a match like that. Having said that he had to be careful not to be lulled into a real scrap in the first couple of games when Tomic was playing well.

"Ultimately Andy Murray was not tested physically, but in how he could maintain his focus."

The Scot, who was rarely tested by an opponent duly served out to navigate what had seemed a potentially tricky opening encounter.

Grigor Dimitrov will be Murray's opponent in the third round after Italy's Simone Bolelli retired from his match against the Bulgarian.

Murray, who bases himself in Miami for several months of the year, reached