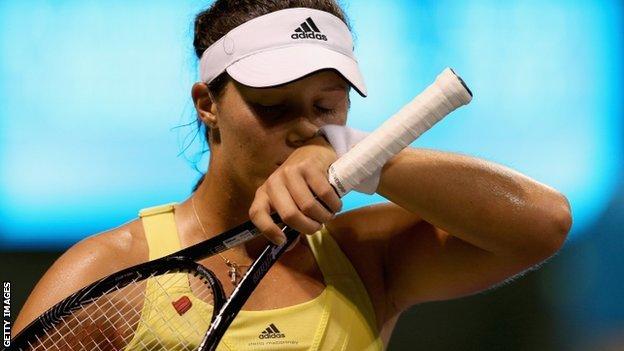 Laura Robson lost her chance to replace Heather Watson as British number one after losing a Miami Masters match that stretched over seven hours.

The 19-year-old was beaten 5-7 7-5 6-1 by France's Alize Cornet in a second-round match interrupted by rain, power cuts and a move of court.

Robson said: "It was difficult, but one of those things you have to deal with."

Elsewhere, the Australian Open champion Victoria Azarenka withdrew from the event with an ankle injury.

Maria Sharapova moved into the third round as she claimed a 6-2 6-0 win over Canada's Eugenie Bouchard.

The circumstances surrounding Robson's match made concentration difficult for both players.

"It was one of the more bizarre games that I've played in," Robson told BBC Radio 5 live. "You can prepare for rain delays but not really power outages."

"Laura Robson might go an entire career without playing a match as bizarre as this. It lasted more than seven hours from start to finish, included three rain delays, two power cuts which led to floodlight failure, and two sets which concluded with double faults.

"Even then the 19-year-old didn't looked like losing until the third set. She hit winners galore as the pair shared 7-5 sets, but her serve, normally such a potent weapon, was a liability.

"She hit 17 double faults and then lost the last six games in a row after the second power cut."

But after a rain delay, the players then had to move to a court with floodlights. The second set lasted five hours but in reality Robson and Cornet were only on court for 60 minutes.

Cornet edged Robson in the protracted second set but the Briton was comfortably beaten in the decider and her French opponent wrapped up the win with a run of five straight games.

Robson now moves on to the clay courts at the Family Circle Cup in Charleston, USA as she looks to improve her world ranking to earn a Wimbledon seed this summer.

"I've never done well on clay until last summer and hopefully I will be able to take form to Charleston," she said.

"I said at the start of the year that I wanted to be seeded for Wimbledon. I don't know what my ranking will be after this defeat so that is still the aim."

Cornet, the world number 36, will now face American Lauren Davis in the third round.

Davis earned her place in the tournament when Azarenka withdrew from her opening match because of an ankle injury.

"I'm very disappointed but I have to take my health into consideration," said the Australian Open champion.

After winning a place in the event thanks to the Belarusian's withdrawal, Davis beat Madison Keys 6-1 5-7 7-6 (9-7) to advance.

In the men's event, world number one Novak Djokovic eased through the second round with a 6-1 6-0 victory over Lukas Rosol.

"He obviously didn't play his best tennis," said Kamke. "But I did a good job and I'm pretty satisfied with that."