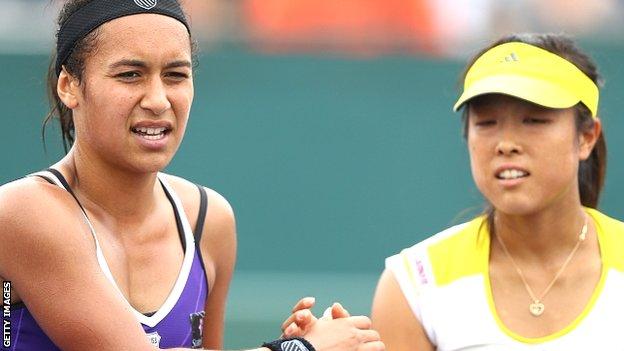 British number one Heather Watson intends to take a break from tennis after losing in the first round for the second tournament in succession.

She was beaten 1-6 7-5 6-4 by Ayumi Morita of Japan in the Miami Masters, and is yet to win a match since reaching 39 in the world rankings.

"This year I've been going a bit too long so I'm a bit burnt out," she told BBC Radio 5 live.

"Watson has done brilliantly to reach number 39 in the world, and will come good again, but her talk of feeling burnt out and needing a break underlines how difficult it is to stay at this level.

"She wasn't going into specifics about the break, but she will want to be fully recharged for the French Open and the grass court season, which are only couple of months away."

"I've been thinking about it now for a while and I'm going to take a break."

The 20-year-old, easily won the first set against Morita and raced into a 4-1 lead in the next.

But Morita, ranked 11 places below her young opponent, hit back to lead 5-4 and broke Watson again to force a decider.

"I was looking at the stats and I actually won more points, but that can happen in tennis," Watson observed.

"It really hurts, I think I just need to find myself, find my game again."

Asked about losing the pattern of the match after such a dominant start she said: "I was playing really well, probably the best I've played this year, and I think I lost my concentration a bit, but that was enough for her to gain some confidence and step forward, and it kind of pushed me back and I started to play a lot worse.

"I still tried to fight but it just wasn't good enough, I wasn't aggressive enough."

Despite Watson is yet to beat a player ranked higher than her this season.

The Guernsey-born Briton benefitted from the retirement of world number 27 Sorana Cirstea in her season-opening event in Auckland.

She was denied the chance to change that statistic as Ayumi advanced to play Belgian world number 30 Yanina Wickmayer in the next round.