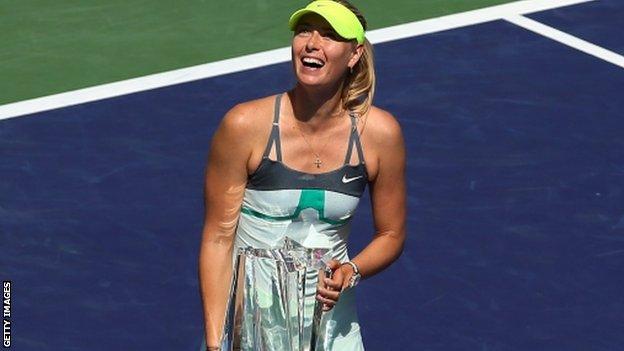 Maria Sharapova's attacking game proved too much for Caroline Wozniacki as the Russian powered to victory in the BNP Paribas Open final.

In a battle of two former world number ones, Sharapova's shot-making ability held sway as she fired 33 winners.

I have to say she just played too well today

The four-time Grand Slam champion will move up to second in the world rankings behind Serena Williams on Monday.

"This is what I do all the work for is these moments," said Sharapova. "You feel like everything has paid off."

Sharapova broke to love at the first opportunity and the pace of her returns kept Wozniacki off balance at the baseline throughout the match.

Wozniacki's father and coach, Piotr, came on court to dispense some advice at the changeover after game five but it did not stop Sharapova breaking again.

The reigning French Open champion finally faced two break points when serving for the set but saved them with blistering backhands, before closing it out with a forehand arrowed down the line after 38 minutes.

A fantastic performance from Sharapova, one of her best in recent years. The Russian's serve worked effectively, barely losing a point, the groundstrokes were devastating, particularly on the return, and her movement - not always her strength - appeared much improved.

Wozniacki didn't play a bad match, defending as best she could, but she didn't have anything going forward which could hurt an inspired opponent.

Sharapova regains the world number two position on Monday and, on this evidence, has every chance of reclaiming the top ranking this year.

Sharapova hit 17 winners to Wozniacki's one in the opening set, and a thumping forehand drive set up break point number four at the start of the second, the Dane giving it up with a double fault.

Wozniacki, 22, stopped a run of five games against her with a hold, but another visit from her father failed to shift the momentum in her favour as the winners kept coming from the other end of the court.

The Dane fought valiantly but her trademark defensive skills were no match for the barrage raining down on her, and Sharapova broke for the fourth time in a lengthy game at 4-2 before serving out to love.

"I think it was a tough match, a tough battle, and there were a lot of games that went to deuce and a lot of long games," added Sharapova.

"I always felt like I was always a foot ahead, especially with the breaks. I was able to serve well today, and that helped me."

Wozniacki said: "She was putting pressure on me from the start. She was serving very well. I felt like everything that she wanted to do today was going in.

"She was making very few errors, and if she did, then it was really at the times where it didn't really matter. I have to say she just played too well today."