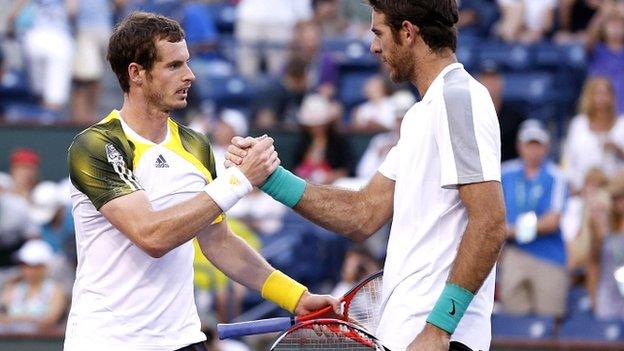 Britain's Andy Murray went out of the BNP Paribas Open with a three-set quarter-final defeat by Juan Martin del Potro in Indian Wells.

He faces Novak Djokovic in the last four after the top seed thrashed Jo-Wilfried Tsonga 6-3 6-1 in 54 minutes.

I hope having played four matches, especially against a high-quality opponent like today in Juan, that will help me in the next few weeks

"It was a tough match,'' Murray said. "He played like someone that's won a lot of matches recently."

Rafael Nadal, who knocked out Roger Federer, will play Tomas Berdych in Saturday's other semi-final.

Murray, as the number three seed, was expected to join them, and went into the contest with a 5-1 lead in matches against Del Potro.

However, their last encounter came in 2009 and this time around British number one found it hard to make an impression on Del Potro's heavy serve and huge forehand.

Murray saved two break points in the opening game, but there were to be no more for either player in the next 50 minutes and, after winning an epic 43-stroke rally in the tie-break, the Scot converted his second set point.

"Murray played nowhere near well enough in the second and third sets to beat a player of Del Potro's quality.

"Despite several moments of brilliance, including some lovely skills at the net, he struggled for consistency against an inspired Argentine.

"Losing six games in a row in the third set was an unusual collapse for the modern-day Murray."

Del Potro's challenge might have been expected to fade, but a break to love gave him renewed impetus at the start of the second set and he went close to breaking again as he levelled the match.

With the temperature in the Californian desert around 35C, both players appeared to be feeling the effects of the heat in a tense decider.

Murray was especially edgy after he finally earned a first break point of the day, only to see Del Potro thump down a huge second serve.

The Briton then offered up a double-fault, a backhand error and a wayward forehand to help his opponent break, and when Del Potro doubled the advantage at 4-1 there was no way back for Murray.

A seventh double-fault gave Del Potro two match points and an eighth handed him victory after two hours and 32 minutes.

"It was very hot; there were a lot of long rallies," said Murray. "Sometimes if your legs are just a little bit tired you can miss serves. The timing might go off a little bit and you're not quite getting up to them. That's maybe what happened today."

Murray will head to Miami for the Masters event that begins next weekend, while Del Potro must recover in time to face world number one Djokovic on Saturday.

"It's good for me, it's what I needed," said Murray, who was playing his first tournament since the Australian Open as he focused on training.

"I needed to play matches and I have to also look at the bigger picture as well. After taking a break you can't expect to play your best tennis straight away.

"I hope having played four matches, especially against a high-quality opponent like today in Juan, that will help me in the next few weeks."