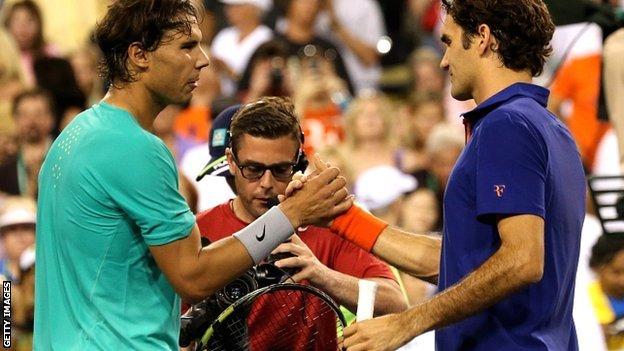 Rafael Nadal beat Roger Federer 6-4 6-2 as he continued his impressive comeback from a knee injury by reaching the Indian Wells semi-finals in California.

Hampered by a back problem, Federer saved a break point but Nadal broke to move 4-3 ahead as he won the first set.

Federer broke Nadal for the first time in the second set but his performance was littered with unforced errors.

"After all their classic battles, this 29th edition was anti-climactic in the sense that Federer, clearly hampered by a back complaint, didn't move as freely as usual and must have known very early that victory was unrealistic. He said he could serve at full pace, and refused to use injury as an excuse afterwards saying it was the same in the last round against Stanislas Wawrinka, but the lack of celebration from Nadal was a classy recognition of his ailing opponent's situation. The Spaniard was excellent, moving well and looking well on course for a return to his old self before too long. He will be thrilled with the way his hard court comeback tournament is going."

"After seven months away, I am happy to be in the semi-finals," said Nadal, who faces Tomas Berdych in the last four.

"Two weeks ago I didn't know if I can be here, and now I am in the semi-finals. I have a lot of positive energy.

"My movement was much better and I had a good feeling on my forehand."

Asked about his back issue, Federer said: "I mean, I could play. I'm happy to be out there and able to compete, but it's obviously a small issue and that doesn't work against guys like Rafa, obviously."

Federer added that he is not surprised by the form being shown by Nadal, who won two out of three tournaments on clay after seven months out.

"He hasn't played for some time on hard court. I don't know if it's careful or if it's just getting used to it again. It's totally normal."

Nadal now meets Berdych after the world number six picked up a 6-4 6-4 victory over Kevin Anderson.

Caroline Wozniacki faces fourth seed Angelique Kerber in the other semi-final after the pair received walkovers when Victoria Azarenka and Sam Stosur both withdrew from their respective quarter-finals.