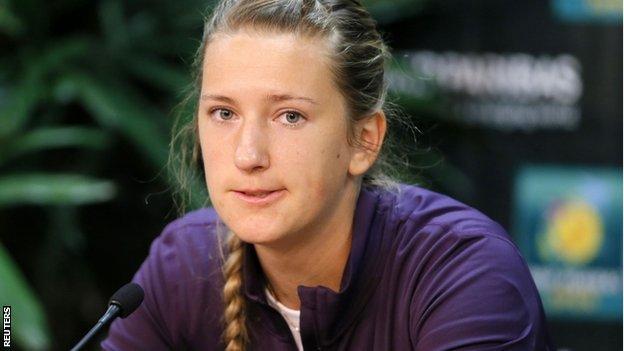 Victoria Azarenka and Sam Stosur both withdrew from their quarter-finals to leave no women's singles matches at the BNP Paribas Open on Thursday.

Seventh seed Stosur pulled out of her match against Angelique Kerber with a calf problem.

"I tried absolutely everything I could, but I have been advised by the doctor, by my own team, that it's just a very, very high risk already."

Azarenka has a 17-0 record in 2013, having won the Australian Open in January, and still hopes to play in Miami at the end of next week.

"There is a big inflammation which keeps bothering one part or another," said the 23-year-old Belarusian.

"It cannot get better with me playing on it, especially playing the last three matches on it. I'm still looking forward to next week to see if I can recover and take it from there."

Australian Stosur said: "I hurt my right calf muscle in the last game of my match against Mona Barthel when I was serving for the match, so I don't know if you can get any more unlucky than that.

"I think this is only the second time I've ever pulled out of a match in my career, and unfortunately there isn't anything I can do about it."