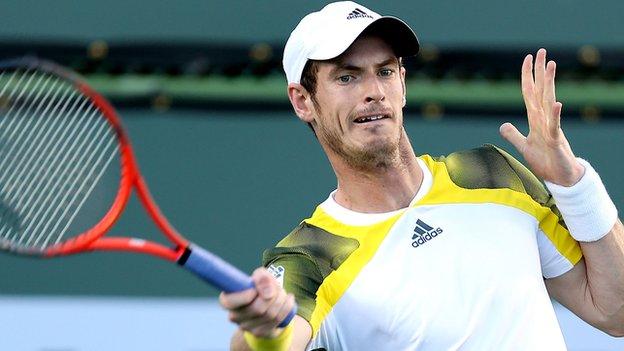 Andy Murray complained about the grunting from opponent Carlos Berlocq as he reached the quarter-finals of the BNP Paribas Open.

The world number three won 7-6 6-4 but exchanged words with the Argentine during the ninth game of the opening set, which he won 7-4 on the tie-break.

"It was extremely, extremely loud; more than what I have experienced from any other player on the tour," said Murray.

Murray will meet Juan Martin Del Potro in the quarter-finals on Friday.

The pick of the last eight-ties will see Rafael Nadal take on Roger Federer for the first time since last year's semi-final in Indian Wells, while Maria Sharapova and Maria Kirilenko are through to the semi-finals in the women's draw.

In a feisty match on Stadium Two, Murray was criticised by Berlocq for taking too long between points and responded by complaining to the chair umpire about the noise level of his opponent.

"It's like sometimes silence and then it comes out of nowhere," said Murray. "It's a bit of a shock.

"That's what I don't understand. To go from nothing to the loudest grunt you can do. It makes no sense."

Murray, who was runner-up at Indian Wells in 2009, said he had never previously spoken to a chair umpire about on-court grunting.

"When I have been on the court or off it, it's never been something I have found to be really that off-putting," said the 25-year-old Scot.

"But if it's going to be suggested that I am using gamesmanship by taking too long, then you can't be making noises like that on the court. I haven't experienced it like that before."

"A match which didn't look particularly pretty and certainly didn't sound it. Berlocq's super-loud, double-edged grunt/groan polluted a pleasant Californian evening. It annoyed Murray so much he shouted 'outrageous' at one point.

"The third seed amusingly described it as 'erratic' because it only appeared at full volume every now and then. It was pretty obvious, as Murray spoke afterwards, that he felt the Argentine had control of the levels.

"So if we're going to complain about Victoria Azarenka's shriek on the WTA Tour, it's only fair we highlight the fact the problem exists too on the ATP Tour. This really was too much and, for Murray, a night to get the job done and get out of there."

Del Potro, another Argentine, set up a meeting with Murray by beating Germany's Tommy Haas6-1 6-2.

Federer served for the match at 5-4 in the second set but was broken to love in the 10th game as Wawrinka came back to win it on a tie-break.

Wawrinka led 2-1 with a break in the third set, but Federer recovered to win the decider and set up a first meeting against Nadal for 12 months.

"It was extremely close again. OK, I should have maybe closed it out in the second set, but he did well to stay in it," Federer said. "At the end, I don't know what got me through. Maybe it's the experience or maybe I was a bit more calm in those moments."

Nadal ended Gulbis's 13-match winning streak but said afterwards that his troublesome knee was only "so-so", and played down his chances against Federer.

"Tomorrow will be a nice match," said the Spaniard. "Always to play against Roger is a pleasure. This match arrives early for me, too early to go to the match with the feeling that I can play equal conditions than him."

Australian Open champion Novak Djokovic made it through to the quarter-finals with a 6-0 7-6 (8-6) victory over American Sam Querrey that finished just short of 2am local time.

The world number one will meet Jo-Wilfried Tsonga in the last eight. after the Frenchman defeated Canada's Milos Raonic 4-6 7-5 6-4 on Wednesday.

In the other fourth-round matches, Tomas Berdych of the Czech Republic beat France's Richard Gasquet 6-1 7-5 and will meet Kevin Anderson in the quarter-finals. The unseeded South African beat 13th seed Gilles Simon of France 6-3 1-6 6-4.

In the women's quarter-finals, second seed Sharapova of Russia, beat Italy's Sara Errani 7-6 (8-6) 6-2 to set up a last-four meeting with her compatriot Kirilenko, who upset fifth seed Petra Kvitovaof the Czech Republic 4-6 6-4 6-3.