After almost seven years leading the Lawn Tennis Association (LTA), probably the most radical and controversial period in the history of the governing body, Roger Draper has decided to resign as chief executive.

The LTA are at pains to confirm that it is his decision and his alone, a resignation accepted at a board meeting on Wednesday, and a six-month notice period will give the organisation plenty of time to find a successor.

But the timing is certainly interesting.

A new independent chairman of the LTA, David Gregson, arrived in January and his wide-ranging review of the organisation has a keen interest in grass-roots participation. Unlike some who have sat in positions of power in British tennis over the years, Gregson has been receptive of feedback from both inside and, crucially, outside the LTA. 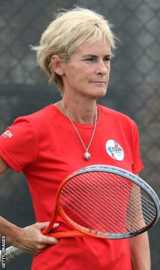 Who is Judy Murray?

The mother of players Andy and Jamie, Murray has coached players for the LTA and was appointed as Fed Cup captain in December 2011.

Tennis participation figures, which have not risen as expected, leading to a cut in Sport England funding and discussion in the House of Lords, are a source of huge concern across the governing body.

Many inside the LTA share Sport England's key concern; they know where they want to go, they don't appear to have a discernible and credible plan about how to get there. Sorting this out has to be an absolute priority for the new boss.

Draper arrived with significant fanfare in 2006 with a mandate to modernise an outdated organisation and lift British tennis fortunes.

He quickly and impressively launched a "Blueprint for British Tennis" with a plan for radical restructure and the promise of "quick wins".

Throwing money at the performance side of the game would provide these, he seemed to assume.

Backed by the Wimbledon millions, he hired headhunters to scour the world for a team of coaches and executives with money apparently no object.

With eye-watering salaries going to a collection of Belgians, Americans and Australians, millions of pounds left British tennis in an attempt to turn average players into slightly better than average players.

It was effectively like putting Jose Mourinho in charge of a non-league club.

Virtually all the people recruited for the "Tennis Leadership Team" have now left the organisation - some sacked, some resigning - and the settlements, not to mention the bonuses, could have built a few more tennis courts, that is for sure.

Abandoning this strategy, along with a private acknowledgement that too much emphasis was initially placed on performance, has meant a number of British coaches - such as Jeremy Bates - are now back on the scene after being turned down for jobs back in the era of excess.

For too long, a contrary opinion was seen as a wrong opinion. The LTA often put up the barriers and dismissed the criticisms of Bates, Annabel Croft, David Felgate, Jo Durie, David Lloyd and Mark Petchey, to name just a few, when ultimately they only wanted to help.

These are people who, despite their life-long passion for the sport, felt they were bashing their heads against Roehampton walls reinforced with the pride of those within them.

Again, this has to change.

British tennis has enjoyed some wonderful moments in the past 12 months - Andy Murray's first Grand Slam title and Olympic Gold, Jonny Marray's Wimbledon doubles win, Laura Robson's giant-killing run at the US Open and Heather Watson's rise into the world's top 40 - but it's important this run of good news does not disguise the challenge we still face.

We are loving the Murray, Robson and Watson successes right now - of course we are - but beneath the surface, both at tour level and in the junior ranks, things are far from rosy.

The number of top 400 and 500 players - the professional base if you like - is lower now than when Draper took over.

As Jamie Murray observed on 5 live sports extra's continuing coverage from Indian Wells, it would be a huge shame if tennis in Britain failed to build on the publicity barrage currently generated by his brother, the world number three.

Any failure here has to be the responsibility of the governing body.

To his credit, Draper has transformed the LTA from a behind-the-times sports body into a modern day business organisation employing more than 300 people.

His big coup was a multi-year sponsorship agreement with AEGON, signed on the eve of the global recession, which has helped develop a schools and mini-tennis programme and left British tennis in a healthy financial state.

He's an effective operator and will surely land another decent job in UK sport, if he wants it.

The question now is what happens next for the LTA and who replaces him?

It won't be straightforward. There aren't any obvious internal candidates and some of the big-hitters who like to think they can do the job don't have the executive experience to run a business of this size.

Someone like Judy Murray has the passion, the inspiration and the ideas to run British tennis but does she have the inside track on the HR department?

Would she want to sit in an office all day? That's not her style.

She's doing a great job as Fed Cup captain but, with so much more to offer, perhaps it's time to reconsider how the top of the governing body is organised. At least have a debate about it.

For example, could the CEO have have less executive power with a tennis advisory board, perhaps including Murray and some of the others I mentioned, having proper decision-making clout?

This is a great opportunity for tennis to build on some of the progress which was undoubtedly made behind the scenes during the Draper years. But some much-needed common sense and straight talking is required in terms of growing the game.

That means putting trust in British coaches, investing in facilities, and listening to those who know what they're talking about. That's not the first time I've found myself saying that over the past six years.

It's time to make it happen.