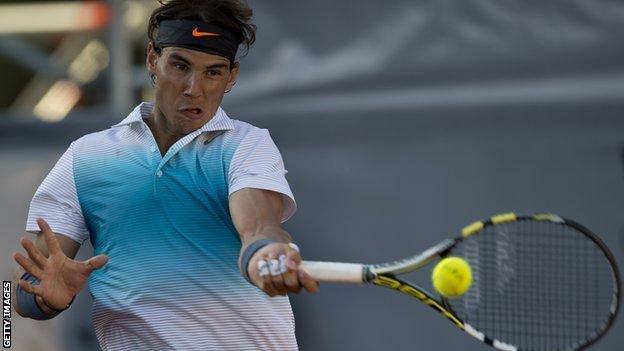 Spain's Rafael Nadal made a winning return after eight months out with victory in his opening men's doubles match alongside Juan Monaco at the Chile Open.

But after beating Czech second seeds Frantisek Cermak and Lukas Dlouhy 6-3 6-2, he admitted he is still in pain.

"The doctors have said it's OK. There is no risk of making it worse," he said.

14 July: Pulls out of an exhibition match with Novak Djokovic because of tendonitis

19 July: Withdraws from the Olympics with tendonitis in left knee

"My knee keeps hurting. But the fact I am playing here is a thing of joy."

Nadal, 26, teamed up with Argentina's Monaco to win his first match since his dramatic second round five-set defeat by Czech Lukas Rosol at Wimbledon in June.

The former world number one, now ranked at five, was forced to withdraw from the Australian Open after his recovery from tendonitis in his knee was hit by a stomach virus.

He also missed the London 2012 Olympics and the US Open.

"I am not 100%, I need some weeks," he added. "If it hurts, it hurts and we'll put up with it. I am here to play tennis, with or without pain. I'm happy to have played an official game, although it was doubles.

"It was a great feeling to play again and I'm very happy for doing it with a friend like Monaco in a great atmosphere that we had on the court.

"In doubles the effort is always less [taxing]. We will see how it goes in singles and how my physical condition is. I chose this tournament because it is the perfect time and surface."

Nadal will continue his comeback on Wednesday when he takes on Argentine qualifier Federico Delbonis in singles.