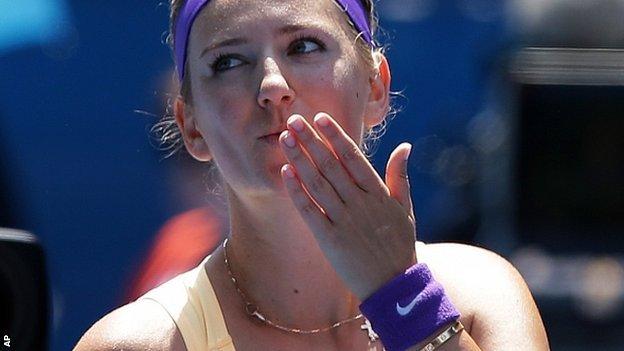 Defending champion Victoria Azarenka strolled into the quarter-finals with a simple win against Elena Vesnina, remaining on course for a semi-final with Serena Williams.

World number one Azarenka triumphed 6-1 6-1 to book a meeting with Svetlana Kuznetsova, who knocked out 10th seed Caroline Wozniacki.

Williams, who has lost just once since her first round exit at last year's French Open, produced a dominating performance in her 6-2 6-0 victory over Maria Kirilenko.

In the men's draw, four-time Australian Open champion Roger Federer was also in convincing form with a straight sets win over Milos Raonic, setting up a quarter-final with Jo-Wilfried Tsonga.

Kuznetsova, who at 75th is the lowest-ranked player left in the tournament, was out for a big chunk of 2012 after an injury to her right knee forced her to miss the US Open, breaking a run of 40 Grand Slam appearances in a row.

"After 10 years of travelling I was getting tired," the 27-year-old said of her time on tour. "But I'm feeling fresh again and very happy to be in the quarter-finals because I struggled last year."

It's no surprise that Djokovic v Wawrinka tops the longest match chart on 5hrs 2mins, but not by much. Kavcic v Duckworth was just 10mins shorter, and Simon v Monfils 4hrs 43mins.

Milos Raonic may be out of the tournament but he at least leaves with the fastest serve, so far, at 233kph (144.8mph) and the most aces on 90. On the women's side, Serena Williams is still well clear on 207kph (128.7mph). Incidentally, the same speed as the leading junior, American Thai-Son Kwiatkowski.

If last Thursday's temperature tested some to the limit at 40.4C, this coming Thursday is predicted to hit a still toasty 37C

The top-seeded Belarusian lost her serve in the opening game of the second set but other than that minor blip it was all one-way traffic as she strolled through in 57 minutes, though seven double faults might be a worry.

Azarenka, who beat Maria Sharapova in last year's final, needs to win again to have any chance of remaining world number one with Sharapova and Williams breathing down her neck.

"The top battles are starting now," she said. "I'm really excited to be so far in the tournament again."

On playing Kuznetsova, she said: "I can see Sveta has come back much fresher, much stronger. She knows how to handle big stages, big tournaments. She's a Grand Slam champion as well."

Tsonga levelled his head-to-head stats with compatriot Gasquet at 4-4 to book a quarter-final against second seed Federer.

Tsonga, who lost the 2008 Australian Open final to Novak Djokovic, has lost his last four matches against the Swiss ace, who beat Raonic in straight sets.

"Richard is a very good friend and I have known him since I was 10. It's never easy to play against a friend," said Tsonga. 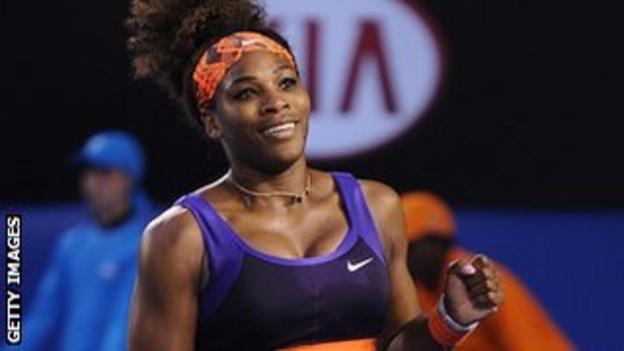 Williams' power proved far too much for her opponent, as she enjoyed nearly 90% of successful first serves, as well as hitting 22 winners.

The 31-year-old, who could become the oldest woman to become world number one with victory in Melbourne, will now meet Sloane Stephens for a place in the semi-finals.

"I'm really out there just doing the best I can, just fighting for everything," said Williams.

"I think with that attitude I'm just trying to stay in the tournament."

Federer moved into his 35th consecutive Grand Slam quarter-final with a routine straight sets win over the 13th seed.

After the turbulence Djokovic encountered against Stanislas Wawrinka, some expected the big-serving Canadian to give Federer problems, but the only sign of a Raonic challenge - taking the second set to a tie break - was quickly, and classily, stifled.

Federer followed up his second-set tiebreak win by breaking Raonic in his first two service games, allowing him to finish the final set in 35 minutes, and complete the victory in one hour, 53 minutes.

"I've got good reflexes," said Federer when asked how he coped with Raonic's serve.

"You try to anticipate a bit, and it happened better and better as the match went on. It's important to stay focused. I have learned that over the years, and it pays off in the end."

France's world number 36 Chardy reached the first Grand Slam quarter-final of his career and will play US Open champion Andy Murray for a semi-final place.

"Four matches, 12 sets and barely enough to raise an eyebrow in terms of drama. Murray's progress to the last eight has been as low-key and energy-efficient as you could wish for at a Grand Slam. The fireworks will come, but for now the Briton is better served by avoiding the kind of epic matches we have seen already this week. His fans seem happy enough, anyway, celebrating with more vigour than we've seen on court this afternoon."

The 25-year-old had never made it past the second round in four previous visits to Melbourne.

"I always play bad in Australia but this time, I played good," said Chardy. "I am feeling very good on the court. It was a very difficult match in the beginning and I was tired, but it was the fourth round in a Grand Slam so I had to be strong in my head."

Murray is still to drop a set in this Grand Slam as he eased into the Australian Open last eight against an exhausted Simon.

It took the Brit just one hour 32 minutes to dispatch the Frenchman, who had been involved in a near five-hour epic with Gael Monfils in the previous round.

"Well, I don't care now, to be honest." Never ask a beaten player how their opponent will do in the rest of the tournament, as demonstrated by Maria Kirilenko on Serena Williams.

Gilles Simon at least made it on to court after Saturday's epic 4hr 43mins win over Gael Monfils, but he had nothing left to trouble Andy Murray. So how did he prepare on Monday? "I was just biking 20 minutes, stretching, massage, cold bath. I did everything I could. But it's difficult when you run a marathon two days before to go for one more two days after."

"I never find whether a ball is heavy or light or yellow or pink. It's pretty much the same. I could play with a rock." Serena Williams does not have an elaborate theory why she's serving so well.