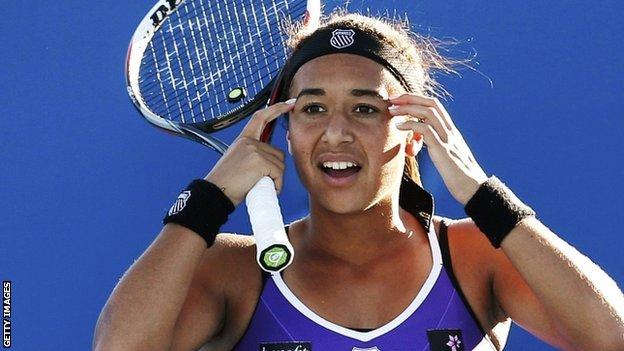 Heather Watson has to think long and hard. What makes her angry?

"The only thing that winds me up is when I'm not playing well," the British number one told BBC Sport.

"Otherwise, off the court I'm pretty chilled. I don't really get mad at anything off the court. Well, at home of course, if my parents wind me up sometimes. Tough love!"

A sunnier disposition it would be hard to find and yet it belies a mental toughness that sets her apart from many of her peers.

Meltdowns are as much a part of tennis as net cords and sweatbands, but Watson has an inner steel that she demonstrated once again in coming back to beat Alexandra Cadantu at the Australian Open on Monday.

"I think I'm showing the other players that I'm one of these girl that's never going to give up," she said.

"I'm always going to be there, so if they want to win it, they're going to have to go out there and win it. I'm not going to give it away."

The match that preceded Watson's victory in Melbourne had lasted three and a half hours as Alize Cornet and Marina Erakovic failed repeatedly to get across the finish line, and the Briton knows that her biggest strength is between the ears.

"I have my mental conditioning coach, Angus, who I see often when I'm in Florida," she said.

"I think it's very important, the mental side of tennis is huge. There's no time limit on tennis so the match is never over. Like [against Cadantu], I just completely flipped from not playing so well, to playing really well.

"I feel like I won, and even if it was a different script I still would have won because it was kind of fate."

Watson, 20, became the first Briton to win a WTA title for 24 years in October with her victory at the Japan Open, and she ended the year ranked 49th in the world and as the British number one.

I don't feel any more pressure, just what I put on myself, but it's a definitely a positive

"I think after how I finished last year, with a title, I really used that to motivate and push me in my off-season to work hard," said Watson.

"I had a different mental approach to how I did things. I felt more professional, more like I belonged with the top girls, and it's definitely helped me.

"I don't feel any more pressure, just what I put on myself, but it's a definitely a positive."

A terrific natural athlete, the question has been whether she has the weapons to match the wheels. The second half of Monday's match gave evidence that there is plenty of power there as Watson reeled off a string of winners off both sides.

The next step is to impose that game on the top players, something that will be key if she is to continue on he upwards trajectory.

Asked on Monday if she believes she can beat anyone, Watson quickly replied: "Yeah, I do."

She has set her sights on a top-30 place, "at least", by the end of 2013 but the going only gets tougher from here, and she is likely to have the added motivation of vying with Laura Robson for the position of top Brit for the foreseeable future.

For now, enjoying the afterglow of a dramatic first win at the Australian Open, Watson's concerns are on how to take her mind off tennis for a few fleeting moments.

A trip to the beach, maybe the cinema, one of the many shows advertised around the city or a table at the restaurant Nobu - "I love it there" - are among the possibilities.

"I've figured this out about myself - I can't be just relaxed in my room watching TV because I'll go crazy," said Watson.

"I have to be out, not doing anything physical, just out around people, socialising. I'm a really outgoing person and it just makes me happy.

"That's one thing I've learned about myself from past years on the tour when I just thought I've got to confine myself, relax, stay focused. In fact, it works better for me if I go out and do stuff because I'm happier on the court then."