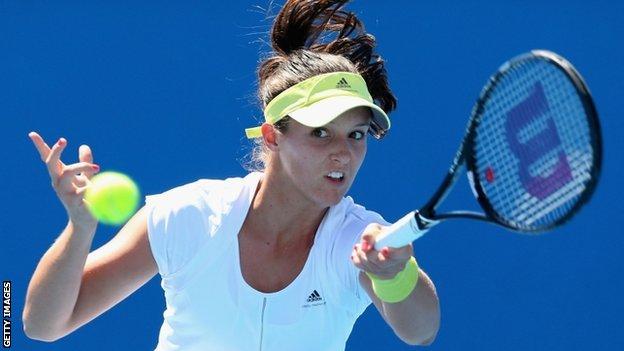 Laura Robson put on a commanding display to race past American Melanie Oudin and reach round two of the Australian Open for the first time.

The British number two, who turns 19 next week, hit 11 aces and a succession of forehand winners in a 6-2 6-3 win to join compatriot Heather Watson in the second round.

Baker, who came through qualifying, had his chances and served for the first two sets but could not close them out.

Robson, meanwhile, goes on to face former Wimbledon champion and eighth seed Petra Kvitova, a fascinating match-up against a fellow left-hander to whom many have compared Robson.

The Briton will have high hopes of repeating the run of big-name scalps she took in reaching the last 16 of the US Open last year.

"I'll go in with nothing to lose again," said Robson. "I seem to play pretty well when I do that. It's going to be tough, two lefties playing each other. I haven't played a lefty in a while, so I'm going to have to try as best I can."

Oudin, 21, has struggled to build on her early promise and Robson had won their only previous match, in the first round of Melbourne qualifying last year.

Ranked 31 places higher at 53 in the world, Robson wasted little time on a sunbathed Court Three, with the temperature climbing ever higher during the afternoon.

She quickly moved 4-0 ahead on the way to winning the first set in 35 minutes and, cheered on by the usual large number of Britons in the crowd, looked to have things wrapped up with an early break in the second.

A couple of double-faults allowed Oudin to peg her back to 3-3, and an unforced error count that ended up at 30 is something she will want to clamp down on.

Oudin was not capable of taking advantage, however, and her fragile forehand handed Robson victory on the second match point after 75 minutes.

"I think I played pretty well, just not as well as I would have liked to. Hopefully in the next match it will be a bit better," said Robson.

"I can hit it pretty hard these days but I think the key is moving around the ball enough to get it to where I want it to go every time. Today I just hit a few balls late here and there, where I should have just moved my feet a little bit."