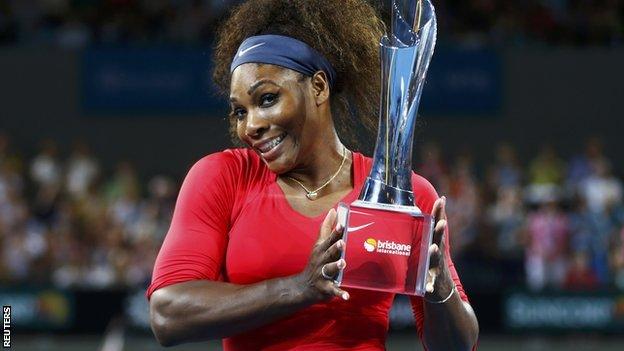 Serena Williams has started the season by securing her 47th career title with victory over Anastasia Pavlyuchenkova in the Brisbane International final.

Williams, 31, is on a run of 35 wins in her last 36 matches ahead of next week's Australian Open in Melbourne.

The American was due to face world number one Victoria Azarenka in the semi-finals in Brisbane but the Belarusian withdrew with a toe injury.

The way Williams dispatched Pavlyuchenkova in 51 minutes suggests she is still in the sort of form that saw her win the last two Grand Slams of last season as well as Olympic gold and the season-ending WTA Championships.

She said: "I don't know if I was in the zone today, but I was definitely heading in that direction. I've been in the twilight zone before, where I just felt so good I couldn't do anything wrong."

She took control at 2-2 in the first set when she went on a run of seven straight games and never looked back after that against Pavlyuchenkova, ranked 36th in the world.

Williams sent down nine aces, winning 91% of her first serves and hitting 24 winners.

In her post-match speech Pavlyuchenkova said to Williams: "I always feel like I don't know how to play tennis when I play against you."

The 15-time Grand Slam champion will be looking to reclaim the Australian Open later this month. She has won the tournament five times with her last victory coming in 2010.

In the men's draw in Brisbane, defending champion Andy Murray reached the final after fifth-seeded Kei Nishikori retired with an injured left knee while trailing 6-4 2-0 in their semi-final.

And world number four Agnieszka Radwanska of Poland got her year off to a good start by defeating Belgium's Yanina Wickmayer 6-4 6-4 to win the ASB Classic. In her first tournament since October, the Wimbledon finalist did not drop a set in five matches as she claimed the Auckland singles crown.