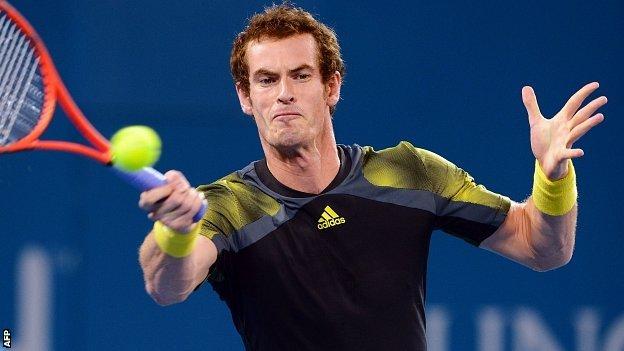 Andy Murray fought back from the loss of the second set against qualifier John Millman to reach the third round of the Brisbane International.

Murray, the US Open champion, took more than two hours to overcome the world 199 after receiving a bye in round one.

The Scot will next play Uzbekistan's Denis Istomin, who beat Lleyton Hewitt.

World number three Murray wasted little time in the first set at Pat Rafter Arena, but his percentage of points won on first serve dropped considerably in the second set, from 75% to 57%, as Millman gained a foothold, breaking twice.

However, 25-year-old Murray regrouped in the final set and dominated on first serve to keep his title defence on track.

"For a first match of the year, that was a perfect match in many ways to go through some tough moments, a lot of long rallies, close games, and important points," Murray said.

"It was great to play in an atmosphere like that for the first match of the year, to get back into the swing of playing in front of large and loud crowds.

"No matter how much you practice, you can't replicate those sorts of atmospheres."

Istomin, the world number 43, won 7-5 7-5 against 31-year-old Australian Hewitt, the former Wimbledon and US Open champion.

Second seed Milos Raonic of Canada failed to reach the quarter-finals after a 6-3 6-4 defeat by Bulgaria's Grigor Dimitrov.