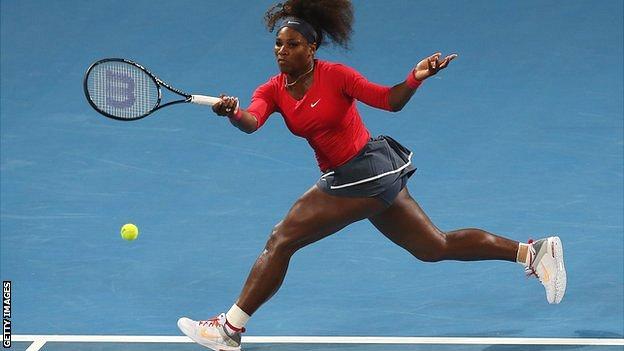 Williams, the reigning Wimbledon, Olympic and US Open champion, converted both of her break points in each set to beat the 19-year-old 6-4 6-3.

The Belarusian will defend her Australian Open title later this month.

I'm not going to be thinking about how well she serves

World number three Williams has an 11-1 record against Azarenka and won all five matches against the 23-year-old in 2012, including the US Open final in September, but talked up the Brisbane top seed.

"I'm going up against the world's greatest tomorrow," said the 31-year-old American. "She had a fabulous (last) year. I feel like I have nothing to lose. She's playing so well, she won I think in 20 minutes today. I have a lot of work to do tomorrow."

Azarenka said: "Serena is a tough match, there is no question about it. One more chance for us to meet, and it's going to be a great test for the Australian Open.

"I'm not looking for easy matches. The tougher it is the more exciting for me it's going to be, so I'm quite happy with that. I have learned something every time against her. It's a matter of getting it all together and trying to execute it in the right way.

"It's obvious she has one of the best serves on tour, but I'm not going to be thinking about how well she serves. My job is to try to put the ball back, you know, then I'll try to play my game.

"I'm there to win the match, not to end somebody's streaks and not to stop somebody from doing something. I'm just focused on myself, and that's how I always am."

After defeating Stephens, Williams said her Fed Cup team-mate had the potential to be "the best in the world one day".

Stephens is the highest placed teenager in the world's top 100, with a current ranking of 38. Britain's Laura Robson, 18, is ranked 53rd.