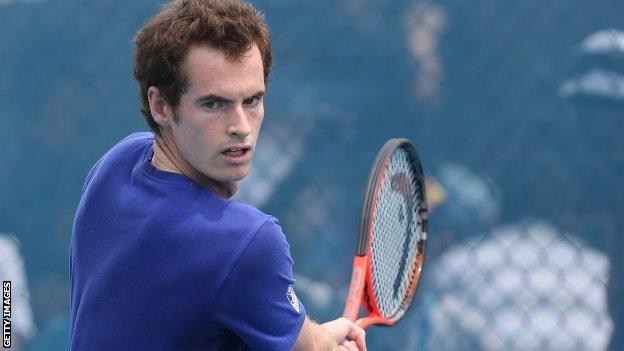 Murray, who also won Olympic gold in 2012, ended Britain's wait for a Grand Slam champion when he beat Novak Djokovic at Flushing Meadows.

"The last few years I got close but never managed to get over the final hurdle," said the world number three.

"Now that I've managed to do it, I hope that when I'm in those situations again I'll deal with them better."

The Scot begins 2013 as the number one seed at the Brisbane International and will face local qualifier John Millman, the world number 199, on Thursday after receiving a first-round bye.

That tournament will act as preparation for the Australian Open - where Murray reached the semi-finals in 2012 - which begins on 14 January.

"I probably just feel a little bit more relaxed than I normally do a few weeks before a slam," said Murray, who finished third in the BBC's Sports Personality of the Year award.

"I prepared very well in Miami and trained hard to get myself ready for the new season, and I hope can be successful here [in Brisbane]."

Following the 25-year-old's success in 2012, when he also reached the Wimbledon final for the first time, he was made an OBE in the New Year Honours list.

Tour de France winner Bradley Wiggins and four-time sailing gold medallist Ben Ainslie received knighthoods, but Murray said he would need to achieve more before he could join them.

"You need to do a lot, for a long time, to deserve an honour like that," he said.

"I've only been doing it for a couple years, so I think I'll definitely need to win a few more matches and have more tournaments to have a chance of getting that."

Murray, who joined forces with eight-time major winner Ivan Lendl 12 months ago, said his new coach had helped him deal with the pressures of being a Grand Slam champion.

"Obviously the few weeks afterwards were very busy, and then once you start travelling and playing tournaments again and get back into the routine of training and practising, life hasn't really changed that much, to be honest, which has been nice," he said.

"Also having someone like Ivan around me as well, he went through a similar sort of thing, so that's obviously helped as well.

"He's given me some advice on how to deal with certain things that come with winning big events."