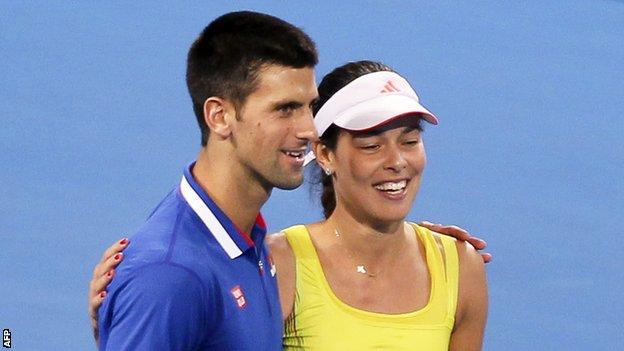 Novak Djokovic suffered an injury scare ahead of his Australian Open defence when a railing fell on his leg while signing autographs for supporters.

Djokovic, 25, limped away from court after his 6-3 6-4 Hopman Cup singles victory for Serbia over Italy's representative Andreas Seppi.

He recovered to partner Ana Ivanovic in a doubles win that saw his nation triumph 2-1 in the warm-up event.

Play begins at the Australian Open in Melbourne on 14 January.

The incident, in which a crowd barrier collapsed on to the world number one and knocked over a number of fans, capped a hectic few days in which he arrived in Perth less than 24 hours before he stepped on to court against Seppi.

"It was a bit of a shock and I'm glad that the children involved are OK. I am fine," said Djokovic.

"I arrived quite late last night and didn't get long hours of sleep and felt this morning like I'm dream-walking. But as the match went on I was managing to get my rhythm. I broke the ice after the first set and felt a little bit better."

A fatigued Djokovic got off to a perfect start in his singles match at the international mixed teams competition, breaking to lead 2-0 in the first set. But he had to defend four break points at 4-3 in the second to complete his win.

Serbia are one of eight countries competing in the round-robin tournament which concludes on 5 January.