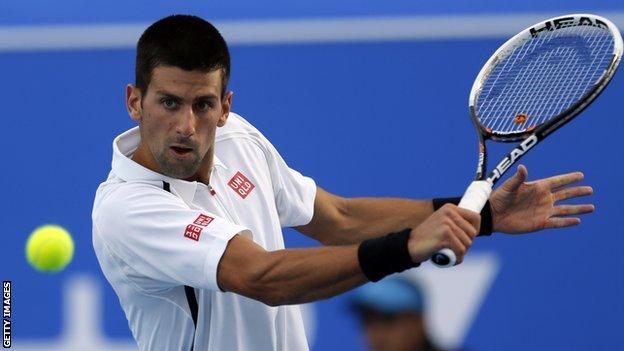 World number one Novak Djokovic made an impressive return to action by beating David Ferrer in the semi-finals of the World Tennis Championship in Abu Dhabi.

The Serb, who had not played since winning the ATP Tour Finals in November, brushed aside the world number five in straight sets, 6-0 6-3.

Djokovic will play Nicolas Almagro of Spain in Saturday's final.

Almagro only gained a place in the tournament as a replacement for Rafael Nadal, who pulled out through illness and has since withdrawn from the Australian Open.

Tipsarevic, who defeated Andy Murray on Thursday, powered through the first set, before each player held serve in an exhausting second set that lasted more than 90 minutes.

Almagro found the extra energy in the tie-break, then took a decisive early break in the decider.

His reward is a meeting with Djokovic, who began preparations for his defence of the Australian Open title by outclassing Ferrer.

With Ferrer committing some uncharacteristic errors, Djokovic raced to a 5-0 lead inside 20 minutes and closed out the first set even though the Spaniard was at last showing signs of competing.

That recovery continued when Ferrer earned an early break in the second, but, after Djokovic got back on terms, the five-time grand slam winner broke again and served out the match.

"I am surprised with my game considering it's the first match of the official season," said Djokovic. "Hopefully I can play another good one tomorrow."