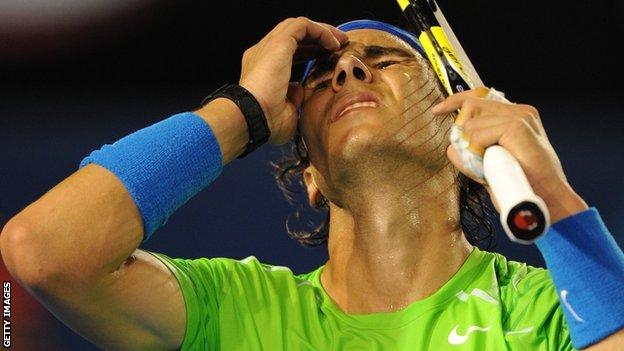 Rafael Nadal has withdrawn from next month's Australian Open because his recovery from a persistent knee injury has been hampered by a stomach virus.

Former world number one Nadal, 26, has suffered from tendonitis in his left knee since losing in the second round of Wimbledon in June.

"The plan now is to return on his favoured clay surface in South America in February.

"His camp say he is suffering from a stomach bug, which is the official reason for pulling out. However, the knee has been a worry. This comeback was eagerly anticipated but the problems have not cleared completely.

"The hard courts in Australia in the heat hold a particularly damaging danger to lower joints and it seems this virus has come at the wrong time.

"Acapulco will now be the surprise scene for his return. With every setback though, one starts to wonder if that is a bit ambitious."

The injury forced the Spaniard, who has won 11 Grand Slam events, to withdraw from both London 2012 and the US Open.

He also pulled out of an exhibition tournament in Abu Dhabi on 27 December.

"My knee is much better and the rehabilitation process has gone well, as predicted by the doctors, but this virus didn't allow me to practise this past week," Nadal said in a statement.

"Therefore I am sorry to announce that I will not play in Doha and the Australian Open, as we had initially scheduled."

Nadal, who won the Australian Open in 2009, also withdrew from this year's ATP World Tour Finals in London.

The world number four had announced on Tuesday on his Facebook page that he had been advised to rest while he recovers from a fever caused by the stomach infection.

Nadal said it was a difficult decision to pull out of his third consecutive Grand Slam through injury.

The left-hander now hopes to return at the Abierto Mexicano Telcel event in Acapulco which starts on 25 February.

"It hurts to have to wait another 12 months before I get another chance [but] in the meantime, the focus is now on desperately trying to get back on the tour," he said.

Australian Open tournament director Craig Tiley said: "It is completely understandable and we really feel disappointed for him."