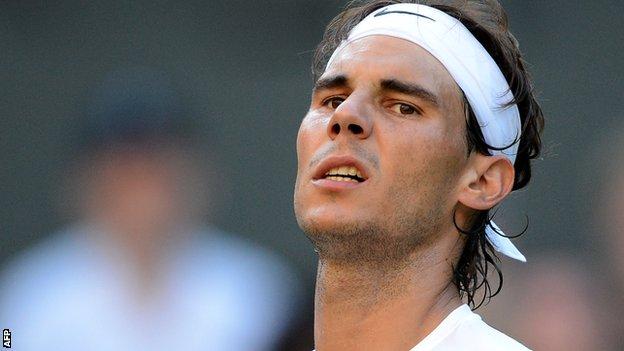 Rafael Nadal's long-awaited comeback from a knee injury has had to be postponed because of illness.

The former world number one wrote on his Facebook page that he had been advised to rest while he recovers from a fever caused by a stomach infection.

The 26-year-old Spaniard, who has been out of action with tendonitis in his left knee since Wimbledon, had been due to play in an exhibition tournament in Abu Dhabi on 27 December.

After suffering a shock second-round loss at Wimbledon to then 100th-ranked Lukas Rosol, Nadal pulled out of both London 2012 and the US Open because of the injury.

"I am very disappointed that I will not be able to compete this year in Abu Dhabi," the world number four said in a statement.

"My rehab has gone well, my knee feels good and I was looking forward to competing. Unfortunately doctors have informed me that my body needs to rest in order to fight this stomach virus.

"I would like to say sorry to all my fans in the United Arab Emirates and around the world, but I hope to play and win in Abu Dhabi again next year."

Nadal is now expected to return at the Qatar Open, which starts on 31 December.

The first Grand Slam of the season, the Australian Open, is due to begin in Melbourne on 14 January.