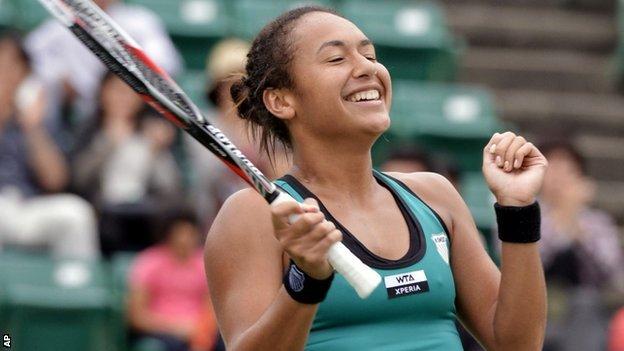 Britain's Heather Watson believes her historic victory in Sunday's Japan Open final is reward for all the hard work she has put in.

The 20-year-old beat Chinese Taipei's Chang Kai-chen to become the first British woman to win a WTA title since Sara Gomer in 1988.

"I've worked so hard for this moment my whole career," said Watson.

"That's why I practised so hard, ran all those miles and lifted all those weights, for moments like this."

Watson saved four match points to win 7-5 5-7 7-6. She is expected to move up to a career-high ranking of 50 when the new list is released later on Monday.

"The match was so close from start to finish," added Watson, who revealed she had questioned whether she really had won in the changing room afterwards.

"She was playing unbelievably and I just had to hang in there. I've worked a lot on being more aggressive but I also had to use my defensive skills.

"When I was three match points down and she was serving for the match, I just thought 'Oh no'. But I just took it point by point. I don't know how I did it but I did. This ranks as one of the best days of my life.

"Britain has been breaking quite a few records recently, so I'm happy I could break another one today and I'm proud to do this for my country."

The Guernsey player, who won the US Open Girls title in 2009, came into the event in Osaka ranked 71 in the world but her victory will see her leapfrog Laura Robson, ranked 56, to regain the British number one title.

"I really wanted to do well this week, so I could earn my rest next week because this is my last tournament of the year," said Watson. "I don't think I could have ended it any better.

"Being in the top 50 was a real goal for me and it will push me to make harder goals for myself. I'm excited to have a break but I am looking forward to working hard again because it motivates me to achieve more."