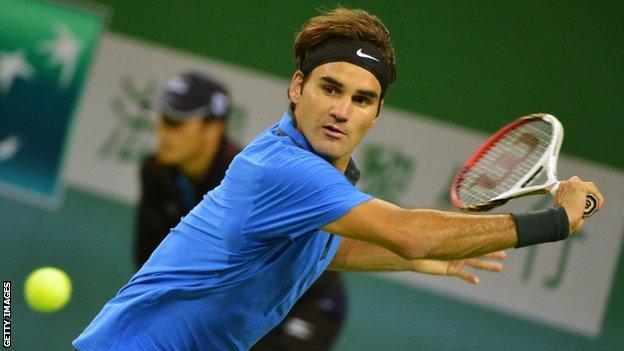 Roger Federer sealed a record 300th week as world number one by beating Stanislas Wawrinka 4-6 7-6 6-0 at the Shanghai Masters.

The 17-time Grand Slam winner came from a set down to defeat Swiss compatriot Wawrinka and reach the quarter-finals.

Federer said: "It's pretty incredible. Probably one of my biggest accomplishments. I'm very proud of that record, no doubt about it."

It was Wawrinka, 27, who made the better start in China, with a break of serve in the seventh game enough to hand him the first set.

Federer was given a scare early in the second but hung on to level the match on a tie-break.

And Wawrinka, seeded 13th, failed to win another game as Federer raced through the third set.

"It's obviously an amazing number and I never thought of anything like this when I was a little kid," Federer added.