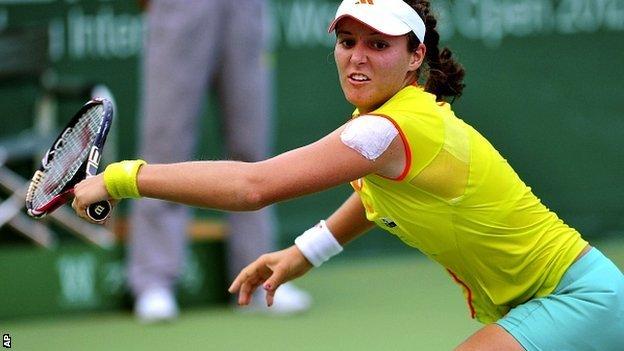 Laura Robson has qualified for the China Open in Beijing but fellow Briton Heather Watson failed to get through.

Robson lost the first set of her second-round qualifying match against Sweden's Johanna Larsson, the world number 84, but went on to take the next two comfortably, winning 4-6 6-2 6-1.

She faces wildcard Kimiko Date-Krumm from Japan in the first round.

Watson started well against Italian Camila Giorgi in her bid to make the main draw, but lost 7-5 2-6 3-6.

Olympic champion Serena Williams has withdrawn from the tournament with illness.

The American, who also won Wimbledon and the US Open in a hugely successful summer, had earlier posted on Twitter: "Flu no fun".

World number one Victoria Azarenka is due to head the field at the tournament - one of four 'premier mandatory' events that rank only behind the four Grand Slams and the end-of-season championships.

However, the Belarusian's participation is in doubt after in Tokyo on Thursday because of fatigue.