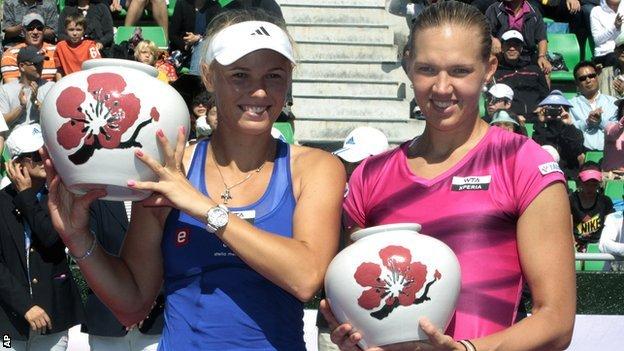 Top seed Caroline Wozniacki cruised to victory over Kaia Kanepi in the final of the Korea Open, winning 6-1 6-0 in an hour and two minutes.

Such was the former world number one's dominance, she only allowed her Estonian opponent to hold serve once, in the fifth game of the match.

Now ranked world number 11, it was her first tour title since August 2011.

"I'm very pleased with how everything turned out. I want to enjoy it and be positive," said the Dane.

"I want to build up for the next season and hopefully my results this week will help me move forward and get back to playing my best."

Wozniacki had recently bowed out in the first round of the US Open, and also suffered an early exit at this year's Wimbledon.

Her crushing victory over Kanepi was in contrast to the semi-final, in which she had needed three sets to beat Russia's Ekaterina Makarova.

"Yesterday was a very difficult match, but the final is the final, and you just do anything you can to win," the Dane added.

"Today I did well at turning defence to offence and offence to defence. That's actually a strength of mine."

Meanwhile, British number two Heather Watson will meet Germany's Sabine Lisicki on Monday in the first round of the Pan Pacific Open in Tokyo, after winning her final qualifying match against Andrea Hlavackova of the Czech Republic.

British number one Laura Robson had planned to play in qualifying for the Tokyo event, but missed out after reaching Saturday's Guangzhou Open final.

Instead, Robson will work with her coach Zeljko Krajan for a few days before attempting to qualify for the China Open in Beijing next weekend.