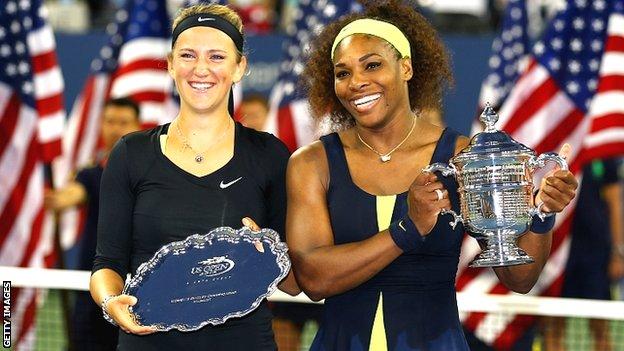 World number one Azarenka served for the match, but Williams broke in a run of four ruthless games to triumph.

What a match that was. A brilliant performance from Azarenka, proving she has the heart and talent to win future Grand Slams, and an even better one from the extraordinary Serena Williams. Fifteen big ones now, including Wimbledon and US Open back-to-back, with double Olympic Gold in between. And the only thing to top the match was the wonderful scene at the end as the friends laughed together and embraced during the photoshoot.

She became the first player aged over 30 to win the US Open women's singles since Martina Navratilova in 1987.

"I honestly can't believe I won," said the American. "I was preparing my runner-up speech because she was playing so great."

Azarenka wept into a towel at the end as her dream of becoming the first Belarusian to win the US Open ended in agonising fashion.

"It's tough but Serena deserves to win," said the 23-year-old. "She showed what a true champion she is.

"I'm honoured to stand with such a true champion here. I definitely gave it my all today, stepping out of this court I have no regrets."

It was a dramatic end to an captivating encounter that suggests Williams remains the leading player in women's tennis and further cements her place among the legends of the sport.

The win comes 13 years after her first US Open title in 1999 - the biggest span of success by a female singles player in the Open era.

She is the fifth woman in the Open era to triumph four times in New York and now has a 15-4 win-loss record from her 19 major finals, including five Wimbledon titles, the latest coming this year.

The result looked a formality as Williams blasted her way through the 34-minute first set with two breaks of serve.

An inch-perfect lob in game two drew applause from Azarenka, while a series of brutal winners in game eight epitomised her dominance.

Having come from a set down to in the semi-finals, Azarenka knew she was capable of mounting a fightback.

Hope arrived with a Williams double-fault early in set two, and the American was further distracted by a foot fault in game three.

Azarenka had captured the momentum and she struck again for a 4-1 lead before comfortably levelling the contest.

It was the first US Open women's final to go the distance since 1995 and breaks were exchanged in a nervy start to the decider.

Azarenka made what seemed a decisive move when she punished an error-strewn Williams in game seven and held for 5-3.

The crowd noise rose to deafening levels and it had contrasting effects - Williams growing in belief, Azarenka wilting.

Williams produced a crunching forehand winner to put the set back on serve, levelled and then broke again when Azarenka netted.

A flurry of ferocious serves moved the home favourite to within a game of glory, and she was able to celebrate when Azarenka fired long.

The women's doubles title was concluded in 76 minutes as Italian duo Sara Errani and Roberta Vinci - who had faced each other in the quarter-finals of the singles with Errani emerging the winner - overpowered Czech third seeds Andrea Hlavackova and Lucie Hradecka 6-4 6-2.

In securing the US Open crown, Errani and Vinci claimed their second doubles Grand Slam of the year having won the French title in June.

"We played unbelievable here," said Vinci, 29, who in reaching the last eight in New York has enjoyed her best singles performance in a Slam. "We are so happy."

And 25-year-old Errani, who will move to the top of the women's doubles rankings, was keen to share in the glory: "[The] good thing is we can celebrate together."