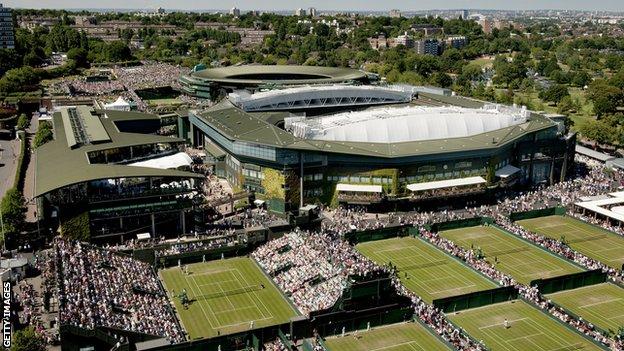 Wimbledon will start a week later from 2015 to allow players a three-week rest period following the French Open.

Currently, the All England Club opens its Championships two weeks after the play finishes at Roland Garros.

But as of 2015 - when Wimbledon will run from 29 June to 12 July - competitors will have 22 days to make the transition from clay to grass.

"There is widespread support within the game for extending the gap," said All England Club chairman Philip Brook.

"One of the biggest frustrations with the congested tennis calendar has always been the tiny gap between the 2nd and 3rd Grand Slams of the season.

A three week build-up to Wimbledon will give players an extra chance to rest and adjust between the surfaces. It's undoubtedly a positive move. But will we really notice much of a difference? It's not as if a Masters event will suddenly be introduced.

The bigger grass court warm up events, such as Queens, will want to shift back with Wimbledon. And no top player will want to play in that week directly after the French."

"The best interests of tennis will be served by allowing the players more time to recuperate and to adjust from the clay of Roland Garros to the grass at Wimbledon.

"We think most players will welcome the prospect of a longer grass-court season and spending more time on the softer surface of grass."

The Aegon Championships at Queen's Club usually begins a day after the French Open men's final and concludes on the following Sunday.

That is also true of the Gerry Weber Open in Halle, Germany, and the Aegon Classic in Birmingham.

In the week before Wimbledon, the Aegon International in Eastbourne and Unicef Open in the Netherlands are the most high-profile events.

Wimbledon being put back a week may influence the North American hard-court schedule building up to the US Open, which traditionally starts on the final Monday in August.

"In making this change from 2015 we recognise that there will be some important consequences for the overall tennis calendar and enough time needs to be given to allow us all to plan accordingly," Brook continued.

"In anticipation of the work required, I would like to thank our colleagues throughout the game for their enthusiasm and support for the vision of a tennis calendar that will better suit the needs of the modern day sport."

World number two Novak Djokovic suggested during Wimbledon that he supported the plan.

"We need an extra week," he said. "It would work in the favour of players because it would give the top ones a little bit more time to get used to the surface.

"Logically speaking, it is the slowest surface that we're talking about, clay, moving to the fastest one, which takes time."