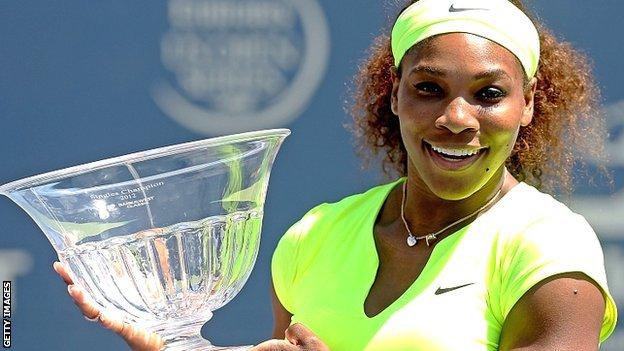 Wimbledon champion Serena Williams clinched the Stanford Classic final in straight sets ahead of her return to London for the Olympics.

Williams saw off set point in the opener to beat compatriot Coco Vandweghe 7-5 6-3.

"I've never felt this fit, this strong, this happy to play - and I think I can be even better," she said.

Williams's successful defence of the Stanford title was her 43rd career title, the same total as sister Venus.

The siblings have each won more titles than any other active player and are joint 10th on the all-time list alongside Justine Henin and Martina Hingis.

Following her triumph at the All England Club, Serena has now won 28 of her last 29 matches, with her only loss since the start of April.

But the 30-year-old admitted that, despite her winning run, she still has yet to hit top form as she prepares for the start of London 2012's tennis tournament at Wimbledon on 28 July.

Serena at the Olympics

"I survived and didn't play my greatest, but mentally I was there and that really helped me a lot," she said.

"But there are a lot of positives and I was fighting and I didn't quit."

Vandeweghe served for the first set at 5-4, but Williams snuffed out her fellow American's only set point with a cross-court winning return.

Williams then converted her sixth break point to pull level at 5-5 before Vanderweghe folded with a double fault in the 12th game.

The second set proved more straightforward for Williams as she broke for 3-1 and kept her serve out of the 20-year-old's reach.

After a couple of days off, Williams will play an exhibition match before heading to London.

She was beaten in the singles quarter-finals by eventual gold medalist Elena Dementieva four years ago in Beijing, but won doubles gold alongside Venus.

"A gold medal will mean a lot to me, but I can't lay all my hopes and dreams on that," she added.